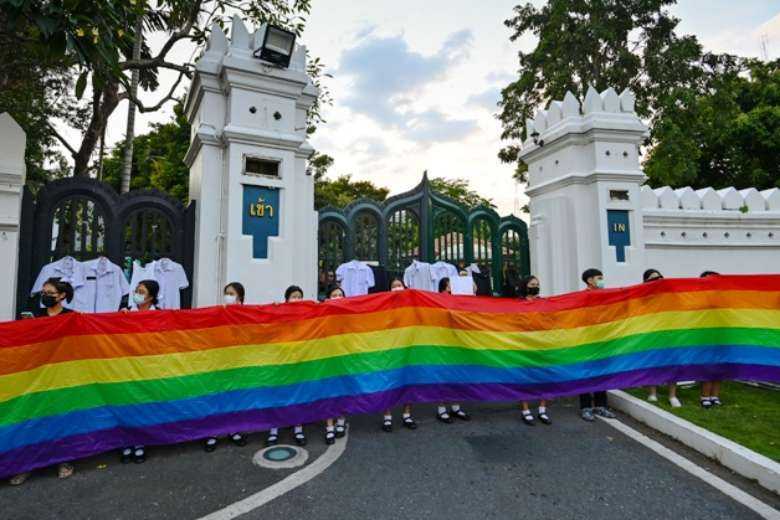 Students hold up a rainbow flag in support of the LGBTQ movement during a protest outside the Ministry of Education in Bangkok on Dec. 1, 2020. (Photo: AFP)

An online petition seeking to convince lawmakers in Thailand to legalize same-sex marriages is fast gaining traction with already a quarter-million signatures within a few days of its launch on Nov. 28.

The petition was launched after a street demonstration organized by the Rainbow Coalition for Marriage Equality, a network of activists and civil society organizations, late last week in support of LGBTQ+ rights.

It proposes an amendment to Article 1448 of the country’s Civil Commercial Code to officially allow marriages between people of any gender rather than only a man and a woman.

The petition also recommends replacing gender-specific terms in existing legislation such as "husband and wife" and "father and mother" with gender-neutral ones such as "spouse" and "parent."

It demands that same-sex couples are given the same rights, duties and legal recognition as heterosexual couples, including the right to adopt children, the right to use their partner’s last name, and the right to inherit property from each other without the need for a will.

The demands were also voiced during a spirited street rally in central Bangkok on Nov. 28 urging the country’s conservative government to grant legal rights to members of the LGBTQ+ community.

We are free to live openly as gays and lesbians and transgender people in Thailand, but we don’t have the same legal rights as [mixed-gender] couples

“We don’t want anything special for ourselves. We only want [our unions] to be recognized by law,” a woman in her twenties who identified as a lesbian and called herself Tukta told UCA News.

“We are free to live openly as gays and lesbians and transgender people in Thailand, but we don’t have the same legal rights as [mixed-gender] couples,” she added.

Thailand in the past few years has taken some steps towards granting same-sex people more legal rights, although activists say the country still has a long way to go before full equality is achieved.

Last month the Constitutional Court ruled that the current marriage law, which recognizes an official union only between a man and a woman, does not violate the constitution drafted by the military after it seized power in a coup in 2014.

However, the court also called on legislators to draft amendments to existing laws with a view to granting LGBTQ+ people more legal rights.

Under Section 27 of the constitution, which was passed in 2017, Thai citizens are “equal before the law, and shall have rights and liberties and be protected equally under the law.”

The section also states that “unjust discrimination against a person on the grounds of differences in origin, race, language, sex, age, disability, physical or health condition, personal status, economic and social standing, religious belief, education, or political view which is not contrary to the provisions of the constitution, or on any other grounds shall not be permitted.”

Last year the Move Forward Party, a progressive political party that enjoys wide support among young Thais, proposed a bill with amendments to the marriage law that would allow same-sex couples to wed legally while also calling for the legal age of marriage to be raised from 17 to 18 years.

Although the bill was submitted to parliament in June last year, it has not yet been tabled for debate in the legislative body.