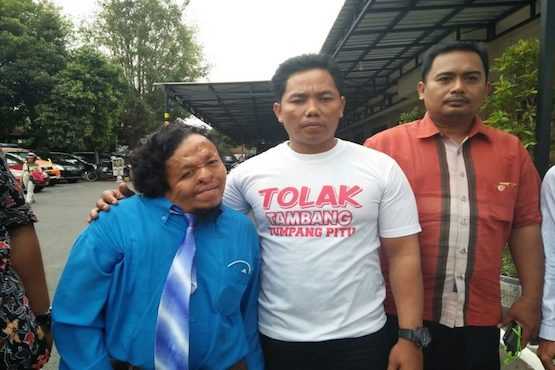 An anti-mining activist has pleaded not guilty in an Indonesian court to charges of spreading communism, in a case that his supporters say is a cynical attempt to undermine his activism.

Heri Budiawan, who could face up to seven years in prison if found guilty, delivered his plea in the Banyuwangi District Court in East Java on Jan. 9.

Communism was banned in Indonesia following the murder of several senior military officers in 1965, which subsequently led to a series of anti-communist massacres in which hundreds of thousands of people were killed.

Budiawan was arrested in April last year after gold mining firms, PT Bumi Suksesindo and PT Damai Suksesindo filed a police complaint against him after the activist organized a protest against their activities in Banyuwangi district.

A banner displaying communist symbols such as the hammer and sickle was held up at the protest the firms alleged.

Prosecutors later charged Budiawan with “committing crimes against the security of the state,” referring to the country’s criminal code that forbid the dissemination of communism and Marxist-Leninism.

Budiawan’s supporters said the charges were trumped up.

"These charges are clearly linked to Budiawan’s opposition to gold mining.” Deva Kusuma, spokesman of “For Banyuwangi,” an environmental advocacy group said.

"The accusations are ridiculous. The rally was only aimed at opposing the presence of the mining companies,” he said.

There is also no proof that the offending banner ever existed, Kusuma said, adding that no such banner had been produced as evidence.

“This fact becomes even more suspicious as protesters made the banners under the watchful eyes of the police before the rally. So where did the offending banner come from?” he said.

Melky Nahar, campaign manager for the Anti Mining Network accused police of siding with the mining firms and ignoring local people’s complaints against the gold-mining firms that operate on an 11,600-hectare site

Since mining began in 2012, he said, at least five villages have suffered disasters such as mudslides.

“Local water supplies have also dried up as a result of mining activities,” he said.

He also said that Budiawan’s case could contravene an environmental protection law which states that “those who fight for their right to live in a healthy and proper environment cannot be charged with crimes or civil penalties.”