Twenty years after an event that changed the course of history, first responders recall that terrible day US flags are displayed before a reflecting pool at the 9/11 memorial in New York on Sept. 10 commemorating the 2001 terrorist attacks. (Photo: AFP)

As the World Trade Center in New York was attacked on Sept 11, 2001, first responders of all kinds did all they could in the hours and days after the towers' fall to bring comfort and hope to those devastated by the terrorist act. That included the chaplains.

During a Sept. 9 online presentation titled "[email protected]," sponsored by the Religious Freedom & Business Foundation, chaplains pressed into service on 9/11 recounted the dizzying array of demands that confronted them.

The Rev. Suzan Johnson Cook, later to serve as U.S. ambassador at-large for international religious freedom, recalled in an introductory video being summoned to New York Police Dept. headquarters to meet with the families of police officers, as 26 officers had gone missing in action after the towers' fall.

"It was a day when there was no barriers," Rev. Cook said following the video. "There was literally no denominations. I remember praying with firefighters who were Catholic, and imams, who were just trying to find brothers and sisters lost in the rubble."

Father Greg McBrayer wasn't a priest, but the terror attacks steered his destiny toward ordained ministry.

He was a flight dispatcher for US Airways that day. He recalled getting to his job at 4:45 a.m. that day, as a lot of flights were moving from Florida to the Northeast. "The weather was beautiful," he remembered, using flight jargon to describe it as "severe clear."

"What we heard was that there was a light aircraft making contact with one of the towers," Father McBrayer said. But "before the second tower was hit, we knew an attack was going on. ... We tried to contact airplanes, trying to get them on the ground. And it went as good as it can be expected. It had never been done before."

As out-of-the-ordinary as 9/11 had been, "the next day truly reshaped my life. I went in the next day. There was a deafening silence in that room. I recall seeing the fear and the anxiety in the faces of my colleagues in that room," Father McBrayer said.

"I remember crying out to God that day, 'Lord, we need you here terribly.' I remember hearing God say, 'That's why I placed you here.' It redirected the course of my ministry, to put faith in the workplace."

After seminary studies and ordination, Father McBrayer returned to work for American Airlines, which had merged with US Airways, to work with employee resource groups to deal with traumatic events as they arise. 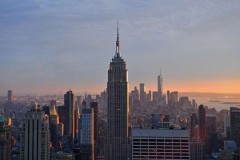 Rev. Miller stayed at ground zero for nine months. His base was St. Paul's Chapel, part of the Episcopal Church's Trinity Chapel complex on Wall Street not far from the attack site, but suffered no discernible damage from the towers' collapse. "Some people called it dumb luck. Some called it a miracle. Some called it 'the little chapel that could,'" he recalled.

Part of his job was to bless found bones and body fragments when they were brought into the chapel by first recovery crews before they were bagged and sent to the morgue.

Rev. Miller recalled one day when he was physically, emotionally and spiritually exhausted. "I was too tired to even pray for my own energy," he said. He spotted some barricade tape. "I sort of kicked at it. It did not say 'Police, do not cross.' It said 'God at work.'

"'God at work,'" he repeated. "I was stunned. Here we are in the middle of this crime scene. I paid attention to that word. God is at work in the place even if we don't see that in this horror. God's active, God's busy in the place of work."

Sept. 11, 2001, was a Tuesday. "The very following Wednesday lunchtime service was called 'Wonderful Wall Street Wednesdays,'" Rev. Cook recalled. "As we looked out, it looked like what Christians should be: every socioeconomic group, every race, every creed were packed in this church."

She added, "They came in traumatized ... eyes huge, 'we can't go on.' But they left another way. The underlying factor that made a difference was faith," Cook said. "Faith took center stage."