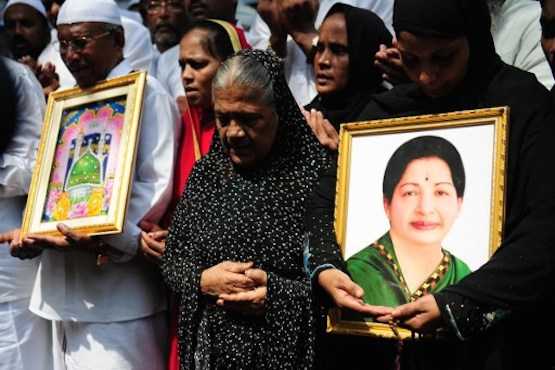 Indians hold a portrait of Tamil Nadu state Chief Minister Jayaram Jayalalitha as they pray for her well being in front of the hospital where she is being treated in Chennai on Oct 5, 2016. (Photo by AFP)

It may sound ridiculous that a group of democratically elected representatives are using a photograph as a substitute for their leader but that is what is happening in the Indian state of Tamil Nadu.

After Sept. 22, when State Chief Minister Jayaram Jayalalithaa was hospitalized, a political and administrative vacuum began to cripple the southern Indian state.

The movie-star-turned-politician was rushed to a private hospital to be treated for a chest infection, according to the official announcement. But what was thought to be a routine round of treatment for the 69-year-old, has become a long sojourn, with no clear information about her health status.

Even though key departments have been transferred to her deputy, O. Pannerselvam, her administration has come to a standstill with no official or minister prepared to take any policy decision without her consent.

As one critic said, the government is "an administration run by a photo," referring to the fact that officials and ministers have been using photographs of Jayalalithaa to represent her during official meetings.

Legal attempts by activists and political parties to force the government to reveal her medical condition failed when the High Court refused to intervene. The government has been releasing sketchy bulletins claiming that her health is improving.

But now teams of specialists from Singapore and Britain have been flown in, people are beginning to wonder if the chronic diabetic is actually suffering from something much worse than an infection.

The lack of clarity from the government has only fueled rumors. Some say she is dead and others claim she is comatose. Memes and cartoons poking fun at the situation have been circulating on social media.

Instead of allaying people’s fears by being honest, the government has arrested seven people, including a Catholic seminarian, and registered cases against 50 people for allegedly spreading rumors on social media and causing public mischief. The crackdown has only caused more anger and anxiety. The seminarian was arrested for posting memes making fun about the chief minister’s health on his Facebook page.

Political and religious leaders have tried to visit Jayalalithaa in hospital only to be turned away. Recently, a team of Catholic bishops made a symbolic visit to the hospital to show their concern. They too were turned away.

Jayalalithaa’s absence is keenly felt by her party, the Anna Dravida Munnetra Kazhagam (ADMK) which retained power in state polls held in May this year.

Known simply as Amma (mother) among her party members, Jayalalithaa’s authoritarian style, sycophantic cabinet and her close aide, Sasikala’s huge influence have been the hallmarks of her government. Her absence has left a huge vacuum.

Jayalalithaa and Sasikala also face charges of corruption. Their final appeal is pending at the Supreme Court which is expected give its final verdict in the coming months. If convicted they could spend at least four years in jail and might be barred from contesting elections for 10 years.

It is hard to believe that in the 21st century, in a thriving democracy like India, the health of a serving chief minister could be shrouded in mystery. Opposition leaders have called for her government to be dissolved seeing as the premier is "indisposed."

The Indian Constitution, which adopted the British system of governance, considers the Prime Minister or the chief minister as "first among equals." A government functions as long as the chief minister enjoys a simple majority and while he or she is deemed competent to administer.

Jayalalithaa’s critics have pointed out that since she is indisposed, her government should be dissolved as per the constitution.

The state is also involved in a long dispute with its neighbors about sharing vital waters from the Cauvery River which has led to sporadic violence. Industrial investment has also slowed over the years due to corruption and policy paralysis.

At a time when so many crucial issues are ongoing, it is rather unfortunate that the chief minister is "indisposed" and the whole issue shrouded in secrecy.

It is imperative that the government declares the real status of Jayalalithaa’s health, so that her party, the government, and the people of the state can move forward accordingly.

No one deserves to know the truth more than the people of Tamil Nadu who voted her to power. That is a minimum they deserve, if not more.

Leo Fernando is the ucanews.com correspondent in Chennai.