Could recent rulings against extremists signal a new start for the Islamic republic? 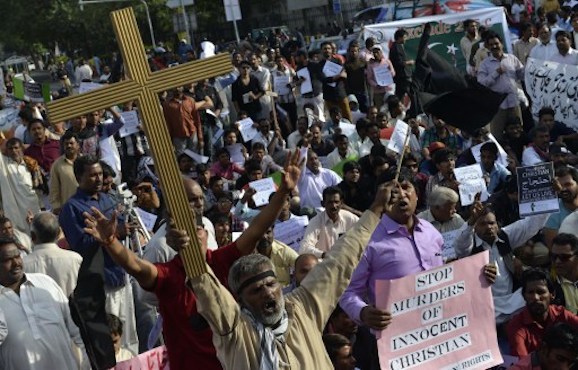 Minority Pakistani Christians chant slogans against the murder of a Christian couple during a protest in Lahore on Nov. 9, 2014. A Christian bonded labourer and his pregnant wife were killed a few days earlier for allegedly desecrating pages of the Quran in a village in eastern Pakistan. (Photo by AFP)

"When law can do no right/ Let it be lawful that law bar no wrong" said Constance when cursing King John in Shakespeare’s history play of the same name.

The famous quote by England's greatest playwright came to mind while reading recent news that Pakistan’s anti-terrorism court sentenced five men to death for burning a Christian couple alive in 2014.

Exactly two years after laborers, Shahzad and Shama Masih were thrown into a brick kiln by an enraged mob for allegedly disrespecting the Quran, the court handed down punishment to the main perpetrators, including a local prayer leader.

Blasphemy is a highly sensitive matter in the Islamic republic and any argument against the controversial law is considered tantamount to insulting the Quran or the Prophet Muhammad. Now the court has taken this surprising decision, many now expect the wrath of hard-line religious groups.

In March, tens of thousands of supporters chanted slogans and threw flowers on the casket of a police officer, Mumta Qadri executed for killing the secular governor of Punjab province in retribution for trying to change the blasphemy law.

"If they had freed Mumta Qadri, the killing of all blasphemers would have become a law," a rickshaw man told me.

While both verdicts could change the outlook of a country that has long been listed as among the top 10 most dangerous worldwide, there is a reason the notoriously slow judicial system has now become swift and speedy.

The government completely lifted the moratorium on the death penalty in all capital cases in 2015 following the Taliban school massacre in Peshawar that killed 149 people.

A constitutional amendment was also passed by parliament allowing terror suspects to be tried in military courts. According to the Human Rights Commission of Pakistan, 425 accused terrorists have been executed since December 2014.

While Catholic priests were divided on these hangings, the Catholic bishops' conference of Pakistan extended its complete support to the army and its presence in the judicial system.

The message from bishops

"We salute the Pakistan army for its efforts and sacrifices in the fight against terrorism and invite all political leaders to play their role to establish calm and peace in society. We pray that people of goodwill may come forward and set the country on a peaceful and stable footing," the bishops said in a Nov. 21 press release.

"Calm and peace seems like a forgotten dream in the country. It looks as if our country’s peace has evaporated into the ether leaving it in the tight grip of extremism, sectarian killings, targeted killings, terrorism, uncertainty and insecurity. The cacophony of the politicos and antisocial actions by various sections of society are getting worse," the statement added.

Pakistan has problems like many other countries. In some cases our problems may frighten us, but we pray that our leaders will always do what is right and stand up for the truth. Protecting vulnerable minorities can cement a good image of the country and its official religion. Hangings can finish the criminals but not the crime.

After decades of memorizing violence and extremism in textbooks, the majority of the population needs to be aware of human rights and social justice. Clerics should stand up and condemn crimes committed in the name of religion. Popular news channels could help by highlighting the contributions of religious minorities to society and emphasizing the liberal teachings of Islam.

After I finished this draft and headed to a nearby park for an evening jog, a news screw asked me about the status of women in the country. Despite my lingering thoughts on 24-year-old Shama, I decided not to discuss her horrific fate. Perhaps it is safer to write than speak.