A groundbreaking interdisciplinary study of the Catholic Church in Taiwan aims to enhance the visibility of the local Catholic community in the international world.

A book about the study suggests that even if the diplomatic relationship between the Taipei government and the Vatican changes, it might be an opportunity that allows better penetration of Catholicism into Taiwanese society.

The Catholic Church in Taiwan (New York: Palgrave Macmillan, 2018), which contains 18 articles in two volumes, focuses on different aspects of the post-1949 development of Taiwanese Catholicism through to the present day in the context of indigenization. It also examines the multi-faceted aspects of the local church through history, philosophy, social science, linguistics, music and literature.

Concerning the triangular relations among the Vatican, Taiwan and China, Sister Beatrice Leung Kit-fun, a professor of political science who initiated the study project, evaluated that sooner or later a diplomatic relationship between Rome and Beijing would be established, but "how to move the nunciature from Taipei to Beijing with minimum hurt to Taiwan is a big problem for the Vatican."

It is unfortunate that the Taiwan Catholic hierarchy does not involve itself much in the issue, with the number of Catholics only comprising one percent of the total population.

Sister Leung pointed out that the diplomatic relationship between the Vatican and Taiwan would be replaced by cultural, academic and religious relations, which might be an opportunity to allow better penetration of Catholicism into the society.

She cautioned: "Never should the word 'severing' or 'cutting the relationship' be allowed to appear in the mass media so as not to arouse fear and uneasiness among the public." Msgr. Sladan Cosic, charge d'affaires of the Apostolic Nunciature, did not make any comments regarding the present situation at a Thanksgiving Mass marking the book's launch on Jan. 13. However, he did say that this monograph not only brings a new vision to its readers about "how many new possibilities of the Church in Taiwan has" but also invites the local Church to go out and grow amid difficulties. He was invited to celebrate Mass at the Wenzao Ursuline University of Languages in Kaohsiung.

Sister Leung told ucanews.com that four years ago she was astonished to know at an international conference that very few good-quality English scholarly works about the Catholic Church in Taiwan have been presented in contrast to numerous Protestant studies. 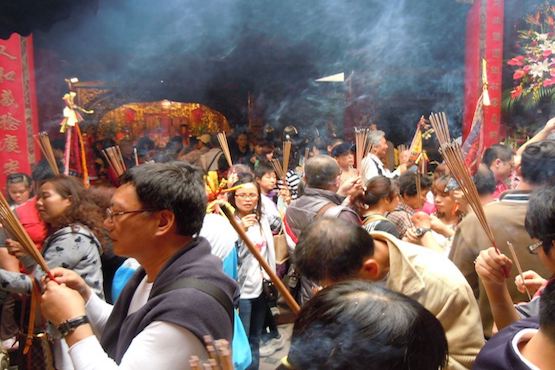 Since she began working at Wenzao University in 2013, the Hong Kong-born Precious Blood nun has realized that the Taiwan Church has many interesting issues worthy of research — for example, why Catholic schools, hospitals and social service centers are welcomed by the public but very few people want to join the church.

Membership of the Taiwan Catholic Church has been decreasing year by year. According to the latest Catholic Directory (2014), there are about 230,000 Catholics in seven dioceses, a 20 percent drop from 290,000 in 2008.

"We need to study Taiwanese Catholicism systematically, not only to make it known to the international society about its contribution but also to look into some shortcomings to provide materials for the church's self-examination," Sister Leung asserted. She also found out that some local scholars want to but are unable to do Catholic studies alone.

Therefore, she formed a team of 15 veteran and young scholars from different disciplines to carry out this collective work, and invited Doctor Francis So, former president of Wenzao (2009-13), and Ursuline Sister Mary Ellen Mylod, retired professor of English education, to join her as the editors.