Challenging the leftist power base in India 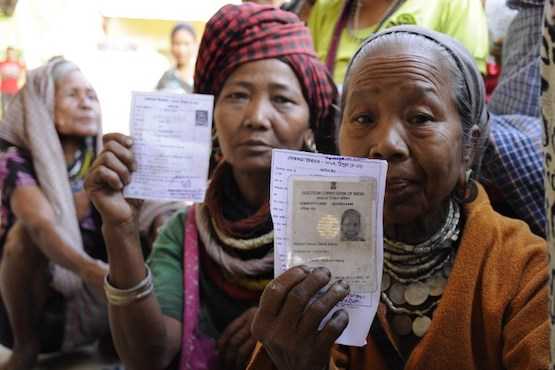 Indian tribal women with their voter identification cards prior to casting their ballot at a polling station in Uttamjoypara, around 210 kms from Agartala, the capital of the northeastern state of Tripura on April 12, 2014 during the fourth phase of the Lok Sabha (lower house) elections. (Photo by AFP)

The Bhartiya Janata Party (BJP) is clearly pursuing an ambitious and aggressive quest for power in the hilly, northeastern Indian state of Tripura that is bordered on three sides by Bangladesh.

Despite growing acceptability for the pro-Hindu outfit in the state, which is home to substantial Christian and tribal populations, the party's expansion plans face multiple challenges ahead of the legislative assembly elections in 2018. Nearly 80 percent of the state's 3.7 million people are Bengali-speaking Hindus, mostly migrated from Bangladesh. Tribals, once a majority in what is Tripura, now comprise less than a third of the state's population. Most Christians are tribals.

The BJP, with its hardcore pro-Hindu philosophy, has ruled the state since the 1990s. It is in a perpetual state of conflict with the Communist Party of India and Christian groups in Tripura. How the BJP performs in Tripura is a litmus test of how it can perform in other Indian states where it is not in power. Tripura has been ruled by a communist government since 1998.

The BJP party strategists know this well. Tripura is not like the northern state of Uttar Pradesh, where pro-Hindu issues such as the banning of beef, cow vigilantism were under the political spotlight. In Tripura, they need to tackle more pressing issues like unemployment, women empowerment and industrialization.

Voters in Tripura are essentially pro-left. Many possess an intellectual affinity to Marxism and the communists have wielded power long and often in the state.

"The BJP leaders need to break the umbilical cord between the voters and pro-Marxist intellectualism," a BJP official told me.

In Tripura, where Marxist leader Manik Sarkar has held onto power for the last two decades, the BJP strategists understand that even upper-caste Hindus do not necessarily relate to the "Brahminical appeal" put forward by their party.

More than 60 percent of the country's population now lives in states either ruled directly by the BJP or in an alliance with regional parties.

Hence there has to be a change of strategy.

Bengali voters in Tripura will never entirely reject the "power of Marxism" as intellectual food for thought or as the foundations of their political reasoning. In the past, it would have been unthinkable for an opposition challenger to the incumbent Marxists or leftists to gain sufficient support in the region.

However, rural workers, such as Sapna Das, the BJP women leader in Tripura, said,  "There is a gradual change and many young voters are readily rejecting the left's ideology."

Drawing confidence from this, BJP leaders have designed a few electoral strategies that aim to capture the minds of voters in areas heavily populated with Bengalis, particularly in areas where the pro-Hindu slant would find easier acceptance.

Ashirwad Dey, an educationist in Tripura said, "The idea is to capture the Bengali mindset, especially among those whose forefathers had to leave Bangladesh during partition in 1947 and later in 1971 [during the Bangladesh war of liberation]."

Due to the extensive numbers that fled Bangladesh (formerly Eastern Pakistan), today's population of the Bengali Hindu community in Tripura is significant.

The BJP is aware of its challenges and inherent weaknesses. BJP leaders claim the party is trying to sell Prime Minister Narendra Modi's "developmental card," even among tribal and Christian sections.

"The overdose of the Marxist regime in Tripura has weakened religious affinities. This applies to both Hindus and Christians. Today, this is, ironically, helping the BJP's cause," one BJP leader said.

Among the Christian leaders in the region, Pastor P. Konyak said, "Due to many factors, including the overwhelming leftist influence, the institution of the church has always been weak in Tripura. Today, BJP is trying to make inroads in these areas largely riding the perceived popularity of Modi and the influence of power at the center."

On the other hand, many voters think that for the first time in two decades, the Communist Party will face a real electoral contest. But that remains to be seen.