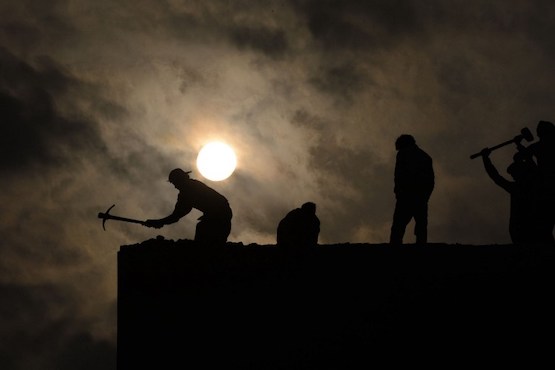 A file image of Pakistani laborers working on a building in Lahore. In a bid to find better paying work many low-skilled Pakistanis seek work aboard, sometimes ending up in dire circumstances. (Photo by Arif Ali/AFP)

In 2006, Anthony Gill went to Afghanistan after being promised a job in construction. What happened next still haunts him today.

"I was working as a waiter at an ice cream parlor when a travel agent offered me a monthly pay of US$300 at a construction company in Kandahar. Each person in our group of eight paid him 40,000 rupees (US$382) and we entered via the Torkham border in the Federally Administered Tribal Area," Gill told ucanews.com.

The Catholic father of five described the next week in the war-torn country as "coming face-to-face with death." His initial excitement ended the first evening on the way to Kabul, the capital city plagued by violence since the fall of the Taliban government in 2001.

"We could see damaged tanks on the roadside. The locals used them as toilets. Every third buildings had bullet-riddled walls. We were stuffed in one room in a hotel with damaged mud walls. Cat-sized rats roamed over us at night. I couldn't sleep fearing what might come next," he said.

On the fifth day, their construction company in Kandahar was attacked by Taliban insurgents. "We locked ourselves in the room when the firing started. Eight workers died that day. They came after Pakistani nationals, an intelligence officer told me".

Gill's worries worsened when they were told that the vacancies in Kandahar were filled and they must shift to a different site in Jesh, 184 kilometers from Kabul. Gill and four other men decided to return to Pakistan while the three others moved to Jesh in the hope of finding job.

"The three of them took vans to the new destination the next day and I never heard from them again. My group headed towards the Spin Boldak border crossing in Kandahar province," he said.

They were threatened again near the border.

"At the border crossing I saw my friends facing the wall with their hands on their heads and Afghan intelligence officers pointing guns. I tried to show them the visa but they grabbed me by the collar and pushed me towards the wall. My acquaintance intervened and we paid 130,000 rupees (US$1,240) for our lives."

Gill safely returned to his home in Lahore three days later. He rested at a relative's house and shaved his beard but the severe diarrhea and sunburn continued for several days.

His story is like thousands of other Pakistanis who aspire to move abroad for better social and economic prospects.

In 2015, the Department of Labor and Human Resources in Punjab province established the first ever Migrant Resource Center (MRC) in Lahore to provide reliable and accurate information and support services to potential migrant workers, returnees and their families.

"Some 90 percent of expatriates are from Punjab, the most populous province. About 60 percent of them are university students. Contract violations are the biggest problem for them as many agents are fake," said Muhammad Shahbaz, MRC coordinator, in a media session at Lahore press club on May 6.

Henley & Partners, the company behind the Visa Restrictions Index, ranks Pakistani passports as the second worst in the world for international travel after Afghanistan.

Pakistan is the sixth largest labor force in the world and has a young population. It is third in Asia for having the highest number of young aspirants seeking to work abroad.

According to a survey conducted by the bureau of statistics, the total unemployment rate stood at 5.9 percent in 2014-15 in Pakistan, the sixth most populous country in the world. With literacy rates estimated at 55 percent in 2015, Pakistanis like Gill who have only studied up to 10th grade or lower must risk their lives and migrate. A laborer carries coal to feed a fire that cooks bricks at a brick kiln in the outskirts of Lahore. Some of the people trafficked in Pakistan end up becoming bonded laborers in brick kilns particularly in Sindh and Punjab provinces. (Photo by Roberto Schmidt/AFP)

Some 25 percent of Pakistan's population were from religious minorities before the separation of East Pakistan (present-day Bangladesh) in 1971. The 1998 census found that 96 percent of the total population was Muslim.

Church officials claim forced conversions, incidents of religious desecration and fear of blasphemy (a deadly allegation) in the Islamic Republic, resulted in Ahmadi and Christian families seeking asylum in Thailand, Sri Lanka and Malaysia. About 1,200 Hindus migrated from Pakistan to India in 2010-15.

Irfan coordinated the "advocacy and networking against trafficking of persons in Pakistan" project in Hyderabad Diocese and the Vicariate Apostolic of Quetta until 2014 when the funds dried up.

"We tried our best to raise awareness among students, domestic workers and different communities. The trend of Christian families migrating to Thailand is decreasing after the Thai government clamped down on illegal migrants," he said.

"Many thought the church would easily resettle them just because they were Christians. Those with money preferred to live in apartments together and were easily caught by Thai authorities," he said.

"They did not have any idea of the additional expenses and were usually robbed of their money by middle men. People from wealthy families were forced to start begging," he added.