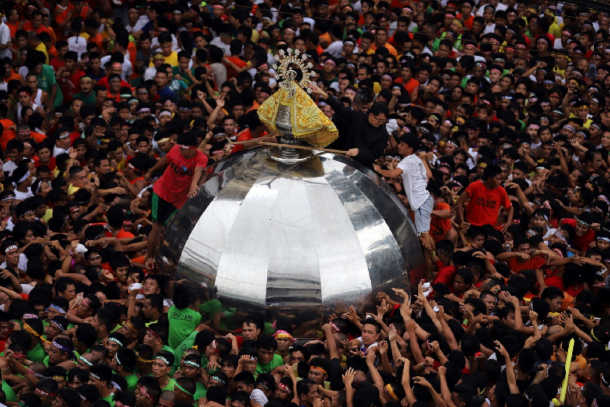 Millions of people join the annual procession to honor Our Lady of Penafrancia in Naga City. (Photo: Rhaydz Barcia)

Church and local officials in Naga City in the Philippines have canceled a three-century-old Marian devotion to the Our Lady of Peñafrancia due to coronavirus fears.

Caceres Archdiocese in the southern part of the main Philippine island of Luzon has announced that September's fluvial procession or any ceremony involving mass public gatherings are suspended due to quarantine and self-distancing protocols.

“The Archdiocese of Caceres is mindful of the present state of the national public health emergency, so we decided to cancel this year’s holding of all processions,” said Archbishop Rolando Tria Tirona and Naga City Mayor Nelson Legacion in a joint statement.

Archbishop Tirona and Mayor Legacion also said the cancellation covers all masses, pilgrimages, including the traditional kissing of the image’s mantle for healing and consolation.

Naga City is known for the Our Lady of Peñafrancia, a title of the Blessed Virgin Mary named after Peña de Francia, a mountain in Spain’s Salamanca province.

The wooden statue of the Virgin revered by devotees in Naga City and across the Philippines originated from the Spanish province.

The image, a replica of the original, arrived in the Philippines in 1712, brought by a Spanish official for his sickly seminarian son, Miguel Robles, who was studying at the University of Santo Tomas in Manila.

Robles prayed to be healed by clasping and kissing the mantle of the Virgin. His family constructed chapels and replicated the image in various churches in the region, thus spreading devotion to the Virgin of Peñafrancia.

Each September, millions of devotees attend the yearly traslacion (fluvial procession) from Naga City Cathedral to the Basilica to commemorate the Virgin’s journey from Spain to the Philippines.

The procession is joined by millions of devotees wanting to touch the image.

However, this year the pandemic has prompted the archdiocese to encourage all devotees and churchgoers to mark the celebration online.

“This is a special moment because of Covid-19. I urge all the faithful and lovers of Ina [Mother Mary] to be united with us through home-based, technology-based religious practices,” said Archbishop Tirona in an interview.

Archbishop Tirona said that there is no need for Catholics to travel to Naga City because all celebrations would be livestreamed by the bishops’ conference.

City officials confirmed strict protocols were in force and non-residents were barred from entering the city without undergoing a 14-day quarantine.

“Please bear with us. We can still show our love and devotion to the Virgin by adopting measures that are for the common good, public health and community welfare,” Archbishop Tirona added.