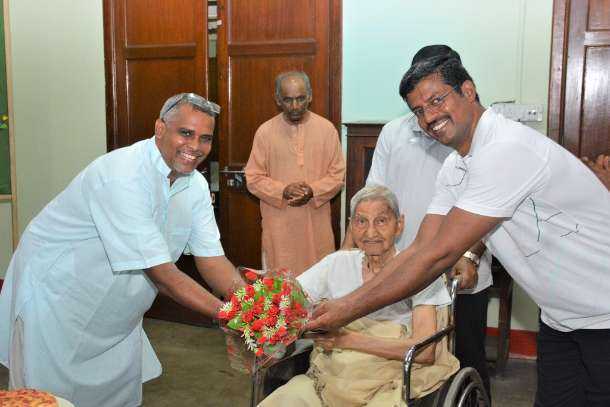 Even after scoring a century, retired Jesuit Bishop Linus Nirmal Gomes retains his great enthusiasm, profound faith in God and love for people.

He marked his 100th birthday on Sept. 7 and became the most senior bishop in India. He celebrated the milestone with fellow confreres in the Jesuit community at St. Xavier’s College in Kolkata, his retirement home since 2014.

“I don’t have any particular work. I pray for the Jesuits, relatives and friends. Every morning I give communion to the senior and sick fathers in the infirmary. Sometimes Jesuit fathers and brothers come to me for spiritual advice. I try my best to help them,” said Bishop Gomes.

Even during the Covid-19 pandemic, he has played table tennis and carom with young Jesuits at the community. He was sick recently but returned to the infirmary at the St. Xavier’s community soon after treatment.

An ethnic Bengali and Bangladeshi by birth, he served Baruipur Diocese in West Bengal state of India as its first bishop (1977-95). He was one of the pioneers of Jesuit missions in neighboring Bangladesh from 1997 to 2014.

Bishop Gomes’ life is a simple but extraordinary example of a life in the service of God and people.

He was born on Sept. 7, 1921, in Baliadior village in St. Francis Xavier Parish of Golla in Dhaka, East Bengal (now Bangladesh) in British India. His parents Domingo Gomes and Anna Cecilia Gomes had four sons and four daughters.

From 1930 to 1939, he studied at Holy Cross High School in Bandura. Three of the Catholic students who passed matriculation (10th grade) in 1940 became priests — T.A. Ganguly, the first Bengali archbishop of Dhaka, diocesan priest Joseph Dutta, and himself.

He went to study at renowned St. Xavier’s College in Calcutta (now Kolkata), enrolled in the science department and stayed in the college hostel. There he met Bangladesh-born Jesuit priest Peter Gomes, a teacher in the college. One meeting with him changed his life forever.

“One day Father Peter Gomes called me and asked me what I intended to do after completing my science major. I told him I would like to study more and then go back to my region and help my community. He then calmly and quietly told me, ‘If you become a Jesuit, you can study more than you want. You could also do more good for your people by becoming a Jesuit than by any other way.’  I was struck by his words and I began to think more often about his words: ‘By becoming a priest you can do more good than by any other way.'”

After his science exams, he returned home and met his maternal uncle, Holy Cross Father Dominic Rozario, then parish priest of Holy Rosary Church at Tejgaon in Dhaka, to discuss his vocation.

“If you think God is calling you, and if you have such desire, that desire is itself the call of God. If you feel a great desire within your heart to become a priest that means God is really calling you,” the priest told him.

Thus, he found the answer to his question.

Back in Kolkata, Linus Gomes joined the Jesuit novitiate at St. Stanislaus College at Sitagarah, Hazaribagh, India, on June 20, 1942. The novitiate had 21 candidates under novice master Father Augustine F. Wildermuth, an American Jesuit who later became bishop of Patna in Bihar.

Following two years of spiritual training, he took his first vows of poverty, chastity and obedience in the Society of Jesus. “That was one of the most joyful moments of my life. I felt so happy and relaxed to belong to God alone and to serve his people,” Bishop Gomes recalled.

Then he moved to Sacred Heart College in Kodaikanal in Tamil Nadu state to study philosophy from 1945 to 1948.

He graduated in Bengali literature in 1949, completed regency in 1950-51 and studied theology from 1952 to 1954. He was ordained a Jesuit priest together with 21 deacons at Kurseong by Jesuit Archbishop Ferdinand Perier of Calcutta on Nov. 21, 1954.

In 1957, young priest Linus was assigned to St. Teresa’s Parish in Moulali of Kolkata, which was then the largest parish of the archdiocese with about 13,000 Catholics. He became its parish priest 10 years later. He was also the headmaster of St. Peter’s High School on Lower Circular Road, the Jesuits’ first Bengali medium school.

Pope Paul VI appointed him the first bishop of newly created Baruipur Diocese on May 30, 1977.

The papal letter left him stunned and he kept the letter the whole day with him as he didn’t know what to do.

“The pope wrote: ‘I would like to make you the first bishop of Baruipur Diocese. Let me know whether you are willing to accept it.’ The Holy Father further said, ‘You cannot discuss this matter with anybody except with your spiritual father.'”

The following day, he met his assistant and spiritual father, Father Henri Julian, and read it to him.

Father Henri remained silent for a few seconds and then told him, “You are weak. Accept it. The Lord will give you strength and help you.”

“That is all, just three sentences. Father Henri was a holy man. That was the wording of my spiritual father. I thanked him,” he recounted.

On Nov. 19, 1977, Linus Gomes was consecrated as a bishop by Jesuit Cardinal Lawrence T. Picachy on the grounds of St. Xavier’s College.

He regretted that his classmate Archbishop T.A. Ganguly of Dhaka couldn’t attend the consecration as he had died a month earlier, on Sept. 2, 1977, from a massive heart attack. Ganguly, declared a Servant of God in 2006, is Bangladesh’s first candidate for sainthood.

“I attended his funeral. I really missed him at my episcopal ordination. Then two of my sisters also came for the consecration,” Bishop Gomes said.

A pastoral shepherd and Bangladesh mission

Bishop Gomes settled at the simple bishop’s house in Baruipur and invigorated the diocese spiritually and pastorally with regular visits to parishes and institutions under his care. People were simple and welcoming, and they had great respect for their bishop, priests, sisters and catechists.

The bishop was able to build up good faith communities. The faithful loved attending church and showed interest in catechism and the Bible.

“We lived a simple life, like our people. Ours was not a sophisticated diocese. Most of our people are farmers and fish cultivators. Education had to reach all people. We were trying to do that in all the parishes. In the bishop’s house too, we led a simple life,” the prelate recalled.

He retired on Oct. 31, 1995, and two years later joined the Jesuit mission to Bangladesh.

“Christianity in Bangladesh began with the Jesuit Fathers as they first came to the land in 1598. They built the first church near Satkhira, Jessore, and blessed it on January 1, 1600, in the name of Lord Jesus Church. The Jesuit mission continued in this part until the beginning of the 17th century. After a long gap, the Society of Jesus attempted to work in the country. I joined them. I stayed there for 14 years with a group of Jesuits,” he said.

In Bangladesh, he settled with Jesuit delegates in rented houses in Monipuripara and Tejkunipara in central Dhaka for years. Later, the Jesuits bought the current house in Monipuripara from a Catholic family.

At the beginning, the Jesuits didn’t have any specific work, but that soon changed.

“Once we settled down in Monipuripara house, we could now regularly visit Catholic families. The demand for evening Masses among the families increased significantly. When we did not have evening Mass, we used to go to the nearby convents of Salesian and Shanti Rani for Mass. The people still request us to offer Mass to their families,” the bishop recalled.

The Jesuit mission in Bangladesh expanded over the years and managed to get some candidates too.

Father Jeyaraj Veluswamy, rector of St. Xavier’s Jesuit Community, said the centenarian prelate is a role model for young people. “Bishop Linus Nirmol Gomes is the source of inspiration for our community,” he said.

Bishop Gomes’ 100th birthday was celebrated in a grand manner in the presence of Calcutta Jesuits and other Jesuit confreres. Following a Eucharistic celebration, everyone greeted the bishop on marking the century and enjoyed a get-together and a birthday banquet.

Out of immense joy and a great feeling of gratitude, the bishop said to his confreres: “We are chosen to work for God, not for ourselves. I love you all with all my heart.”