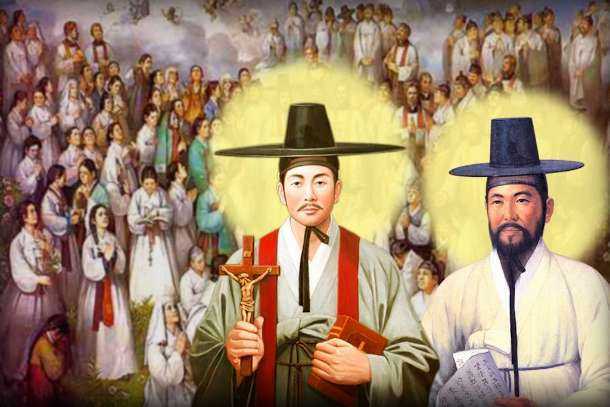 The Catholic Church in South Korea has marked the official beginning of the nationwide celebrations of the 200th birth anniversary of St. Andrew Kim Taegon, one of the nation’s most revered Christian martyrs.

Among the dignitaries attending were Bishop Mathias Lee Yong-hoon of Suwon, the president of the Catholic Bishops’ Conference of Korea, and Archbishop Alfred Shuereb, the Vatican’s ambassador to South Korea.

A host of activities will be held during the jubilee year until Nov. 27, 2021, the day before the first Sunday of Advent.

Other Catholic archdioceses and dioceses as well as all parishes in the country held special Masses to mark the start of the jubilee. In addition, Catholics participated in exhibitions and walking pilgrimages to commemorate St. Andrew Kim and his companions who sacrificed their lives for their faith in Jesus in the 19th century.

On Nov. 28, Father James Won Jong-hyeon, president of the Korean Catholic Martyrs Museum in Seoul, launched a special year-long exhibition in the presence of Cardinal Yeom and Bishop Benedictus Son Hee-song of Seoul.

Bishop Lee Yong-hoon, who delivered the sermon during the special Mass, urged Catholics to follow in the footsteps of St. Andrew Kim and embolden their Catholic faith and identity.

“The jubilee theme, 'Are you a Catholic?', is a question that Father Kim faced during his interrogation in prison, and it is a heartbreaking question to each of our believers in this era,” Bishop Lee said. “Father Kim replied, 'Yes. “I am a Catholic,” and he dared to shake off the fear of death and confessed his wonderful faith in God.”

During the Mass, the decree of jubilee, a special message from Pope Francis and congratulatory remarks from President Moon Jae-in were read out.

Following the Mass, Cardinal Yeom presided over the launching of a special coin of St. Andrew Kim produced by Korea Mint Corporation and a bust of the martyred priest.

St. Andrew Kim (1821-46) was the first Korean-born Catholic priest and is now the patron saint of Korea.

According to Franciscan media, he was the son of Christian converts. Following his baptism at the age of 15, he travelled to a seminary in Macau, China, and returned to his homeland after six years through Manchuria. The same year, he crossed the Yellow Sea to Shanghai where he was ordained a priest.

Back home again, he was assigned to arrange for more missionaries to enter by a water route that would elude border patrols. He was arrested, tortured and finally beheaded at the Han River near Seoul.

The saint’s father, Ignatius Kim, was martyred during the persecution of 1839. Paul Chong Hasang, a lay apostle and married man, also died in 1839 at age 45.

Christianity came to Korea during the Japanese invasion in 1592 when some Koreans were baptized, probably by Christian Japanese soldiers. It then started as an indigenous lay movement.

However, the Church faced huge difficulty in evangelization as Korean authorities refused all contact with the outside world except for taking taxes to Beijing annually. Dozens of Christian men and women including clergy were martyred for refusing to denounce their faith.

In 1984, during his visit to Korea, Pope John Paul II canonized 103 martyrs including Andrew Kim, Kim's father Ignatius Kim, Paul Chong and seven French missionaries who had been martyred in the 19th century.

South Korea has about 5.6 million Catholics in a population of about 51 million.