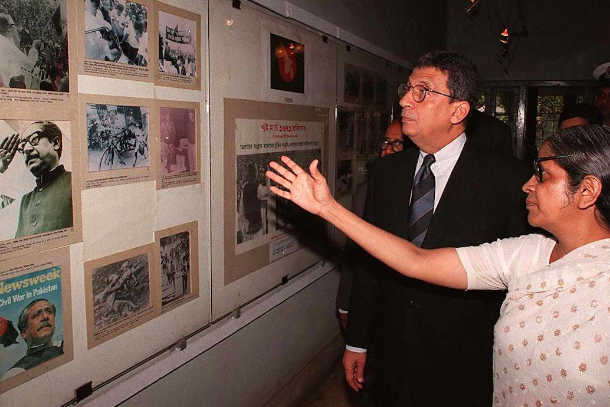 Egyptian Foreign Minister Amr Mussa looks at pictures of the late Mujibur Rehman, Bangladeshi leader of the 1971 war between Bangladesh and Pakistan, as he is taken on a guided tour of the Bangabandhu Museum by an unidentified official, 02 March, 1999 in Dhaka. Arko Datta/AFP)

On the wintry afternoon of Jan. 10, a C-1303 landed at the Old Airport at Tejgaon, central Dhaka and was greeted by 21-gun salute and guard of honor.

Some 150 people, including students, government officials and diplomats welcomed the plane and the door lit up with laser lights. The plane was a token aircraft, presented by the British government, but it carried no passengers.

The event symbolized the historic homecoming of Sheikh Mujibur Rahman (popularly known as Sheikh Mujib), the nation’s founding father, on Jan. 10, 1972, 25 days after Bangladesh gained independence from Pakistan after a nine-month war.

During the conflict, Mujib was arrested and imprisoned in Pakistan. He was released and allowed to return to his independent homeland via London on that day.

The Jan. 10 program also marked the official countdown to Mujib Borsho (Mujib Year), the birth centenary of the great leader from March 17, which will continue until March 26, the 50th anniversary of independence.

“The Father of the Nation dreamed of a Sonar Bangla (Golden Bengal), a nation free from poverty and hunger. On this day, I hope people will build Sonar Bangla and place it in a dignified position in the world,” Prime Minister Sheikh Hasina, Mujib’s eldest daughter, said in her speech.

Hasina also inaugurated the logo, theme song and a website to kick off the official countdown to Mujib Borsho. The government has set up large countdown clocks in all major cities and towns across Bangladesh.

Through year-long programs and activities, the ruling Awami League government intends to spread the vision, philosophy and ideology of the great statesman at home and abroad.

A total of 294 programs, including short films, documentaries, international awards, memorial books and speeches of Mujib in Bengali and English, seminars, and cultural functions will be held to mark the birth centenary.

Christians gear up for celebrations

Christians, both Catholics and Protestants, will hold various programs to mark the birth centenary of Sheikh Mujib and golden jubilee of independence.

“The Church has chalked out a range of activities including prayers, seminars and cultural functions in various Churches and Church-run institutes,” Bishop Shorot F. Gomes, auxiliary Bishop of Dhaka Archdiocese, told UCA News.

He said the aim is to pay tribute to “the great leader and get inspiration from his life, vision and teachings.”

“Sheikh Mujib was not just a great political leader, but also a visionary and a spiritual man, which led him to take great risks to love people selflessly. He is a great model for the younger generations, so they can contribute to build a better society,” the prelate added.

All eight dioceses have started various programs and activities to mark the centenary nationwide, said Father Augustine Bulbul Rebeiro, coordinator of the Central Committee for the celebrations.

Protestant Churches, which are members of the interdenominational United Forum of Churches in Bangladesh, have also joined with the Catholic Church to mark the occasion.

The Catholic Bishops’ Conference of Bangladesh has instructed the country’s 400,000 Catholics to plant one tree each during the year, Father Rebeiro told UCA News.

“A special seminar to highlight the iconic life and works of Sheikh Mujib, and a publication to mark his 100th birth anniversary are planned. We would like to present and contemplate how Mujib became a great leader and father of the nation,” the priest added.

“Each unit is planting 100 trees in their respective area. On March 17, we will arrange a special prayer service, memorial meeting and children’s art competition to mark the birth centenary of the father of the nation,” Rozario told UCA News.

“Everyone knows about Sheikh Mujib, but what is important is to bring his vision and ideology into our lives and the way he loved the people and sacrificed his life.”

Sheikh Mujibur Rahman was born on March 17, 1920 in Gopalganj,  Bengal, then part of British India.

He studied at a Christian missionary school in Gopalganj before going to study law and political science at the universities of Calcutta (now Kolkata) and Dacca (now Dhaka).

Mujib was politically active in his student days and joined the Awami League in 1949. His pro-poor politics and strong stance against military rule in Pakistan made him an iconic political figure and earned him the popular honorary title, Bangabandhu (Friend of Bengal).

Under Mujib’s leadership, the Awami League won a landslide victory in Pakistan’s first general election after the 1947 partition of the Raj.

On March 7, 1971, Mujib delivered a historic speech to millions of people at the Race Course Ground (now Suhrawardy Udayn park) in Dhaka and urged them to fight and to make any sacrifices to achieve freedom from oppression.

After negotiations between the military government and the Awami League failed, Pakistan’s military launched “Operation Searchlight”—the military codename for a genocidal crackdown in East Pakistan on March 25.

Before his arrest in the early hours of March 26, Mujib declared independence. The Bangladesh government in exile in India, led by Prime Minister Tazuddin Ahmad, waged war against Pakistan with support from India.

The bloody nine-month conflict ended with the surrender of the Pakistan army on Dec. 16, 1971 at Suhrawardy Udayn park, the same ground where Pope Francis offered a public mass on Dec. 1, 2017.

Freed from prison and back in Bangladesh, Mujib formed a government and became president in 1972.

On Aug. 15, 1975, Mujib along with most of his family were assassinated by soldiers at his residence. His daughters — the current PM Sheikh Hasina and Sheikh Rehana — escaped the same fate because they were in Germany.

The residence has been turned into a museum, which Pope Francis visited on Nov. 30, 2017.

Mujib’s killing sparked massive political upheaval and a series of military coups and counter-coups. Two military regimes from 1975-90 erased secularism from the constitution, established Islam as the state religion and introduced religion-based politics.

After years in exile in India, Hasina returned in 1988 and took up leadership of the Awami League.