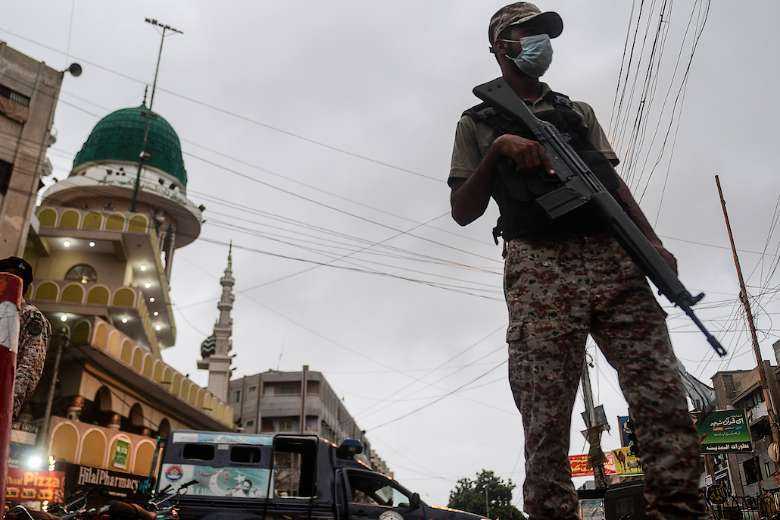 A Pakistani paramilitary soldier stands guard as Muslim devotees offer prayers on a street during Eid al-Adha, or the Festival of Sacrifice, in Karachi on July 21. (Photo: AFP)

Pakistan suffered a major diplomatic setback this week when neighboring Afghanistan recalled its ambassador to Islamabad over "security threats" after the envoy's daughter was briefly kidnapped in Islamabad.

Afghanistan refused to cooperate with Pakistan over the investigation of the abduction, adding to the mounting pressure on Pakistan’s government to do more amid the withdrawal of US troops from Afghanistan.

Meanwhile, Taliban insurgents continue their battle in dozens of districts across Afghanistan to gain territory. Mohammed Naeem, the Taliban’s spokesman in Doha, denied media reports that the group had agreed to an Eid ceasefire.

“Ghani seems to be a brave soul, not affected by the sound of missiles dropping. I sincerely believe that the Taliban taking over Afghanistan is going to strengthen their counterparts Tehreek-e-Taliban Pakistan,” said UK-based Asif Mall, who chairs the Pakistan Minorities Rights Organization.

“Last time that happened, nearly 100,000 Pakistanis lost their lives, including many Christians in attacks on churches.”

Last week Samson Salamat, chairman of the interreligious Rawadari Tehreek (Movement for Tolerance), led a rally in Lahore to condemn the glorification of the Taliban by state officials. However, the policy of appeasing them didn’t seem to work.

Also last week, 12 people, including nine Chinese citizens, were killed after a bus carrying construction workers in Pakistan's Khyber Pakhtunkhwa province plunged into a ravine following an explosion. Pakistan’s foreign ministry cited a gas leak as the cause of the blast while China’s foreign ministry spokesperson referred to it as an “attack” and called for a full investigation by law enforcement agencies.

The United States has long blamed Pakistan for providing safe havens to the Afghan Taliban and regional militant groups. The recent incidents will further plunge Pakistan down the grey list of the Financial Action Task Force, the global body working to combat the financing of terrorism and money laundering. They will further dent the soft image the establishment has been trying to develop so desperately.

Despite the availability of a military ground, the organizers preferred a Christian venue for the high-profile event to keep their identity a secret. Archbishop Joseph Arshad of Islamabad-Rawalpindi later led a delegation of priests and nuns to visit the Islamic Research Institute in Islamabad. They were provided with information related to Paigham-e-Pakistan, a national narrative to counter violence, extremism and terrorism.

We need more such messages as the Taliban taking over Afghanistan will adversely affect Pakistan, especially local Christians. The increasing risk of terror will force churches to make tougher security plans and increase coordination with local law enforcement agencies.

Christians should heed the call of Archbishop Sebastian Shaw of Lahore to avoid evangelizing in workplaces. Church-run interfaith groups will have to broaden their social circles and add more clerics to promote unity and brotherhood.

Pakistani Christians will have to prepare themselves spiritually and politically for a sudden and steep surge in persecution. We must strengthen our family values to avoid increasing cases of forced conversions, an argument already refuted by government officials. The increasing Islamic influence is seen by many as a challenge for Christian youth, especially our females.

The world may have been in pandemic mode last year but Christian leaders were already confined in spiritual quarantine. There is no denying the ongoing tussle between the Catholic Church's hierarchy and Christian human rights activists. The rivalry is mainly centered over project ownership and the claiming of project resources.

Such efforts, though invisible, are commendable. They kindle my trust in a church trying to survive in a security-state obsessed with religion

A previous mass exodus of Christians led to thousands ending up in Thailand, Malaysia and Sri Lanka. Sad stories from Thai detention centers have slowly spooked many and discouraged the trend of selling their properties to become asylum seekers in these destination countries. A church-run organization in Pakistan is trying to provide spiritual support to those trapped in Thailand and settle those willing to return to the Islamic republic by supporting their businesses.

Such efforts, though invisible, are commendable. They kindle my trust in a church trying to survive in a security-state obsessed with religion. Economic migrants are another category. Both the state and the Church should do more to convince wealthy Christians with professional degrees to invest in local businesses, serve the community and provide job opportunities for those failing to find a job because of their faith.

As I conclude this piece, policemen are being deployed at mosques and imambargahs (Shia congregation halls) for security during Eid congregations. My Muslim neighbors have spent the last few nights in the community compound watching over the sacrificial animals, one of them tied in front of my door. They spend their time gossiping and preparing public dinners. May the magic of Eid bring peace and joy in Pakistan across borders.

Kamran Chaudhry is a Catholic commentator based in Lahore. The views and opinions expressed in this article are those of the author and do not necessarily reflect the official editorial position of UCA News.