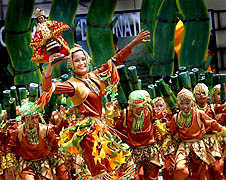 Street dances are part of the activities for the Sinulog festival. (Photo courtesy of sinulog.ph)

Cebu in the central Philippines was today putting the final touches on preparations for its famous "Sinulog" festival to celebrate the feast of the Santo Niño or Child Jesus. At least two million people, including the Philippine president, Noynoy Aquino, are expected to join Sunday’s grand parade. "Having the president attend the Sinulog is a security nightmare, but we are prepared to strengthen our security plan," said Ricky Ballesteros, head of the Sinulog Foundation that takes charge of the celebration. The Chinese-Filipino community in the city are also joining the festivities, saying it is already part of their lives and a chance for them to be one with the people of Cebu despite differences in traditions and beliefs. “We pay respect to the tradition because we belong to the same community,” the Philippine News Agency quoted trader Joni Chan. Dickson Lim, director of the Cebu Filipino-Chinese Chamber of Commerce and Industry, said Chinese families who believe in the Christian faith have reason to celebrate. Those who are not Christians also have their own way of celebrating, he said. “It gives us a feeling that we are truly part of the Cebuano community,” he said. The image of the Santo Niño in Cebu is a gift of Spanish explorer Ferdinand Magellan to the queen of the island during her baptism as a Catholic, thus bringing Christianity for the first time to Philippine shores in 1521. Cebu Archbishop Jose Palma called on devotees to be inspired and work to promote peace. "I pray that our devotion to the Santo Niño may also make us work for peace.... All of us must suffer because of hatred but it is the little ones who suffer the most," the new archbishop of Cebu said. Archbishop Palma was installed head of the country’s largest ecclesiastical territory yesterday. In Tondo, Manila,  and other parts of the country, the Philippine Coast Guard will be on alert for the river parades marking the feast of the Santo Niño this weekend. Coast Guard commandant Admiral Wilfredo Tamayo has appealed to devotees not to overload the boats. Tamayo has ordered search-and-rescue units and divers’ teams to keep watch over the festivities. He said he does not want a repeat of the tragedy that occurred during past fluvial parades where many devotees drowned because the boats used were overloaded. Related reports Cebu shrugs off liquor ban for famous festival Devotees flock to Cebu for ‘Sinulog’ festival PV12850.1636