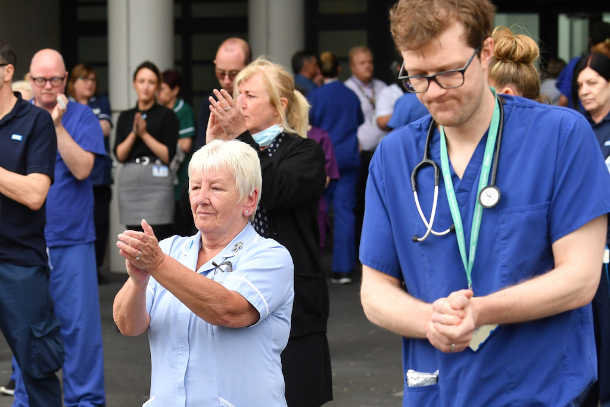 NHS staff applaud after pausing for a minute's silence outside Salford Royal Hospital on April 28 to honor UK key workers, including NHS staff, health and social care workers, who have died during the coronavirus outbreak. (Photo: AFP)

Catholics are demanding an inquiry into why so many elderly people have died in UK nursing homes during the Covid-19 crisis.

More than 20,000 people have died in UK care homes as a result of the coronavirus pandemic, according to an analysis by Reuters news agency.

The UK, which has a population of 67 million, has the second-highest recorded coronavirus death toll in the world after the United States, with nearly 37,000 deaths as of May 25.

Father Patrick Pullicino, a neurologist who was ordained in 2019, told Catholic News Agency that an inquiry must be independent of the government, which has been criticized for its handling of the pandemic.

“There has to be an inquiry. A fifth of the population has been basically denied reasonable healthcare and in an arbitrary fashion.”

Father Pullicino, a former chairman of the department of neurology and neurosciences at the New Jersey Medical School who now serves as a chaplain at a London hospital, criticized guidelines issued for the National Health Service (NHS).

The guidelines help doctors to decide whether adults with coronavirus symptoms qualify for critical care.

Father Pullicino highlighted a passage that referred to “end-of-life care” if a patient’s condition worsened after they were assessed as “more frail” but not suitable for critical care.

He said that this advice encouraged doctors to treat sick elderly people who fell into this category as if they were dying.

“When this whole Covid crisis started, people realized that there weren’t enough ventilators compared with other countries. We didn’t have a lot of NHS beds either because the number has been run down over the last number of years. So I think there was panic,” the priest said.

“They decided to clear the hospitals to make a lot of space ready. The hospitals were cleared of the elderly and many of them were sent to nursing homes.”

Father Pullicino suggested that some of those moved to nursing homes could have had the coronavirus, which has an incubation period of up to 14 days.