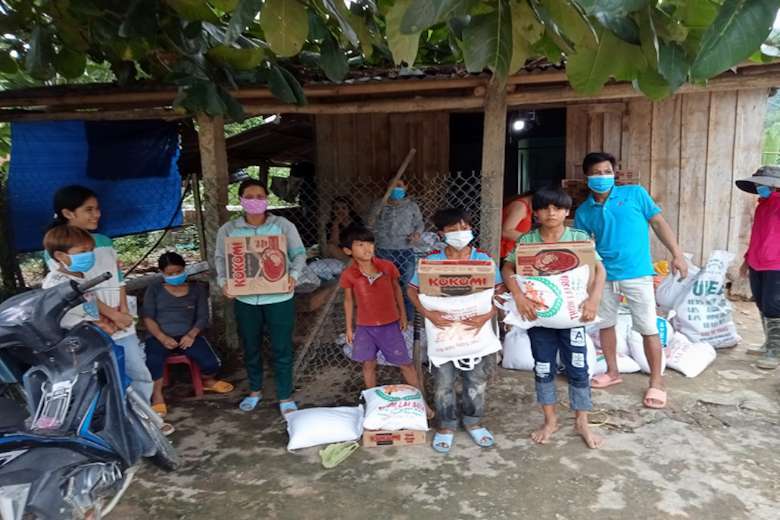 Catholics offer basic food to villagers stricken by Covid-19 in Quang Ngai province as a way of evangelization. (Photo courtesy of gpquinhon.org)

Catholics in Vietnam are urged to celebrate the coming World Mission Sunday by praying the Our Father and reaching out to people in need.

Bishop Matheus Nguyen Van Khoi of Qui Nhon said October is chosen as the Mission Month, starting with the feast of St. Therese of the Child Jesus, patroness of mission lands, including Vietnam.

Bishop Khoi said the height of Mission Month is World Mission Sunday falling on Oct. 24 this year. The entire Church unites in prayer and sacrifices for the work of evangelization worldwide and locally.

He said it is also an opportunity for Christians to reflect on the task of evangelization they received in baptism and confirmation, on how to carry out that task in various circumstances, and on their enthusiasm for mission so that they can improve the effectiveness of missionary work.

The prelate said it is Jesus who taught his disciples how to pray to his Father for the missionary work that he himself initiated with the cooperation of the apostles and all Christians throughout time. He also taught the apostles a wonderful missionary prayer — the Our Father — that we say every day but often without realizing it.

The head of the Episcopal Commission for Sacred Arts of Vietnamese bishops said the first part of the Our Father consists of three missionary prayers: Our Father, who art in heaven, hallowed be thy name, thy kingdom come, thy will be done on earth as it is in heaven.

Today, thanks to God's mercy, many parishes have been restored with their old names, and many new parishes are born from the desolate areas of those days

Bishop Khoi said that after Vietnam was reunified in 1975, Qui Nhon Diocese witnessed a scene of utter desolation: many age-old parishes with a substantial number of members no longer existed, while countless churches were destroyed or left desolate. Local Catholics became extremely confused and fearful like widely scattered sheep.

“Be aware of the missionary nature of the Our Father. The late Bishop Paul Huynh Dong Cac called on all parishes, subparishes and families to recite together the Our Father at the end of their prayers to pray hard for evangelization in the diocese,” he said.

“Today, thanks to God's mercy, many parishes have been restored with their old names, and many new parishes are born from the desolate areas of those days. A lot of new churches are built in villages, towns and settlements.”

However, the 70-year-old prelate said, Catholics in many places still must practice faith secretly, could not attend religious activities regularly, and face various problems in their faith life. He said the 177-year-old diocese covering the provinces of Binh Dinh, Phu Yen and Quang Ngai has a considerable number of people who have not known God yet, making missionary work quite difficult.

He called on local Catholics to “maintain their tradition of saying the Our Father in prayer for the evangelization work in the local church.”

“In particular, on Mission Sunday, please diligently attend Masses, meditate on the Word of God, pray the rosary and do other pious deeds to pray for evangelization,” he said.

It is also an opportunity for them to learn about ways of evangelization through group discussions and reading books and articles.

They should also make sacrifices by reducing their expenses to offer as many contributions as they can to missionary funds. “Do not use the Covid-19 epidemic as an excuse to limit your generosity to the funds,” he noted.

Father Joseph Nguyen Huu An from Phan Thiet Diocese said today's evangelization primarily aims at instilling the Gospel's spirit into people and all human realities, not bringing as many souls as possible to God.

To carry out that unworldly mission, he said, "we do not necessarily go to other geographical areas but take our own living environments as foreign lands and consider political, economic, cultural and social spheres as bordering areas to which the Lord sends us.”

He said the new frontier areas include cooperation among all members of parishes, pastoral care for fetuses, families and migrant workers, charitable activities and communication ministry. Evangelization after the lockdown in the Covid-19 pandemic is to take pastoral care of patients, orphans and people in misery conditions.

The 54-year-old priest said Pope Francis encourages Christians to go forth from their own comfort zones to reach out to strangers in peripheral areas.

The pastor of Thanh Tam Parish said this is not just a lifestyle that positively adapts to the trend towards globalization but also a means and solution for the Gospel of Christ to be preached more widely and effectively. The trips to peripheral areas anchor precious memories in other people's hearts.

Father An said many people leave their safe zones for the periphery and fight against injustices, doubts and illegality. They show the light of the Gospel, of reason and of justice for those who are sitting in the shadow of death.

“Evangelization is being willing to think like Christ and believe that people around us are also our brothers and sisters. May his compassionate love touch our hearts and make us all true missionary disciples,” he said.