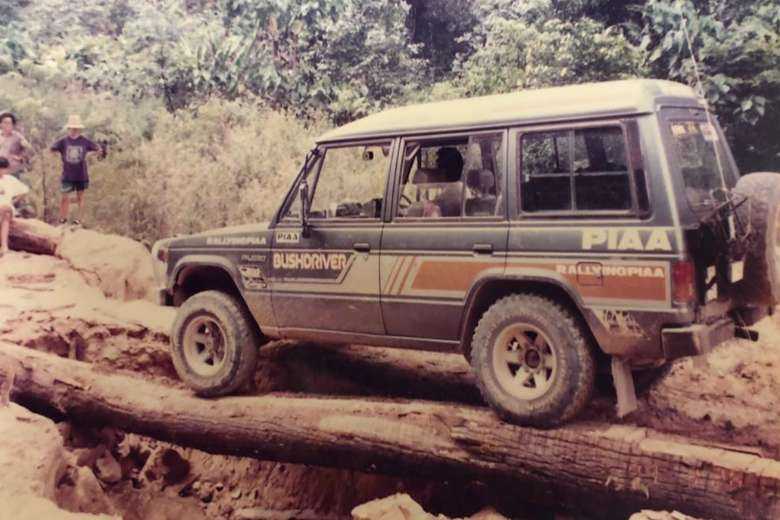 A balancing act for Light of Jesus Christ Covenant Community members on a trip to a remote part of Sabah state's rugged interior. (Photo: Anthony Lim)

By Journey With Us-Asia

They had been traveling in a convoy for almost two days from Kota Kinabalu, going eastward across Sabah. The tarred roads had now turned to a bumpy and muddy track through a logging area in the interior. There was no other vehicle or people in sight, only huge sky-reaching trees. There were about 11 of them all crammed up in three four-wheel-drive vehicles, and they were on an exploration trip.

Then the vehicle stopped. In front of them was a river with its raging waters and two logs across for a bridge. Joseph Chee got out with the others and looked at what seemed to be an almost impossible situation. Further down on the other side of the river was their destination — a cluster of villages that were so far from civilization. Each village had about 100 people. No one knew of their existence until a forest ranger came across them just a few months earlier.

“He happened to see them [during one of his treks],” said Anthony Lim, 63. He was relating this trip that took place in 1985, which was told to him by Chee and the others. He was 28 then and was supposed to be with them but had a prior engagement.

“We felt there was a need to share the Gospel with them,” said Lim, adding that that was the reason the forest ranger told them about the people in Paitan. Chee, Lim and the other were at that time (and still are) members of the Light of Jesus Christ Covenant Community based in Kota Kinabalu, the capital of Malaysia’s Sabah state in the northern part of the island of Borneo.

“We were young and restless for the Lord. We thought we’d just go and do it. Our community leader Joseph Chee together with the team felt that it was an opportunity from God. We discussed it with Emeritus Archbishop John Lee. He told us to watch out and that it [Paitan] was dark spiritually.”

At that time, Paitan was just a cluster of villages deep inside the jungles where animism was rife. The forest ranger, a Catholic, had told them about how the villagers needed a lot of help from the outside world in terms of healthcare, education and nutrition. This team was to go and assess the situation and see what needed to be done and how.

The vehicles got onto the logs, each wheel on a log, starting with the front wheels and then the back. One by one, the vehicles managed to get across without the wheels slipping off the logs and landing in the river.

On a subsequent trip to Paitan, the vehicles got stuck in the mud. “It seemed impossible,” said Lim, who was on that trip. “One of our teammates managed to get a timber truck to come to our rescue. The truck pulled our vehicle out.”

Lim said the presence of God could not have been clearer on that first exploration trip. “As the team came to the entrance of the village in Paitan, in front of them in the sky was a double rainbow.” To the team that was a sign from the Lord that he was the one leading them there.

The double rainbow became one of the ways God showed Lim and his community that they were on the right path. “Our community was started on July 31, 1983. On that day, after it was launched and when all of us walked out from the parish home, we saw a clear double rainbow in the sky. And somehow the Lord put it in our hearts that this was his way of showing us that he was with us.”

On that first trip, the team spoke to the villagers, who expressed their openness to want to know about the Gospel. They were invited to come back and help them.

“We kept going back to that village because we felt God saying to help them in the mission. One of the young men in our team felt called and stayed there with the people. Then our covenant community sent different people now and then to support him,” said Lim.

“We do a holistic, evangelistic approach. We started simple schools to educate the children, and each time we went there we brought medical people to teach them about hygiene, and at the same time we gave them spiritual formation.

“Health was bad, their mindset was different. Most kids did not live past teenage. We taught them hygiene, to wash their hair properly, drink clean water.”

After a year, about 40 villagers were ready for baptism. A priest was sent to the village. A chapel was built using the timber grown there. The Catholic community began to grow.

In the first year, Lim’s covenant community decided to foster three children and have them grow up in Kota Kinabalu. “With clear permission from the parents, we brought them and gave them education.” That was 30 years ago and one of the children has returned to his village and is a catechist there, while the other two are leading their own lives in Kota Kinabalu.

Lim said: “Our volunteers also taught the kids there. Slowly the Franciscan Sisters came in and supported them. They built a kindergarten in one kampung [village] and then in the different kampungs.”

Today they have 10 kindergartens in Paitan and its surrounding areas.

The covenant community also realized it was necessary to have homegrown teachers to help the nuns. They arranged for some of the children in their late teens, who had gone through the education system, to take a diploma in childhood education.

Teaching materials, books and meals had to be provided while they were at school. The covenant community arranged sponsorship for each child where their members paid for the expenses of one child every month.

After a while, the covenant community decided to pass the responsibility of providing further spiritual guidance and community development back to the Church. When they started their mission work in Paitan, there was only the Diocese of Kota Kinabalu, but in 2007 the Diocese of Sandakan was set up and so Paitan and its mission work came under this new diocese. There is now a parish in Paitan and the parish priest comes from Sandakan Diocese.

“We are a community within the Catholic Church and we are not independent of the Church. So we serve the Church and we give our allegiance to the Church, the bishop and respect the hierarchy,” said Lim.

“Today there are more than 1,000 parishioners there [in Paitan] and more Catholic communities have been set up in nearby areas — in Sonsogon, Mengandai, Batutai, Gosusu and others,” said Lim, adding that several villagers have been trained to be catechists.

“We continue to support and sponsor some of the schools there.”

That first trip to Paitan took them two days, but today it is just a four-hour drive.

This is an edited version of an article that was first published here on Journey With Us-Asia, a website about the Catholic community in Malaysia.