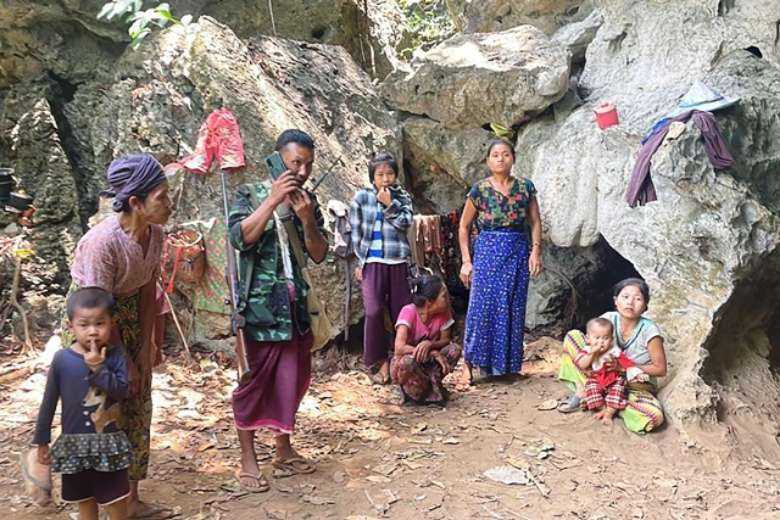 An armed man next to civilians hiding in caves after airstrikes and mortar attacks on their village by the Myanmar military, according to the humanitarian group, Free Burma Rangers, in Myanmar's eastern Kayin state on May 3. (Photo by handout: Free Burma Rangers/AFP)

On a sunny morning in early May, hundreds of villagers arrive at the Catholic Church compound after fleeing their homes in the wake of raids by Myanmar’s military junta.

Soldiers raiding villages to flush out local militia is nothing new anymore. Thousands of fleeing villagers, all of them Buddhists, have taken temporary refuge inside two monasteries in this historic Catholic village (name withheld for security reasons) in Myanmar’s northwestern Sagaing region. A hundred more are sheltered inside the church compound.

The parishioners who want to attend daily Mass cannot as the crowds inside the church make it impossible to hold one. Even the Marian grotto is completely surrounded by desperate refugees.

But the local Catholic villagers don’t mind it. They see that the people who fled here are without enough clothes and food. So they have begun to collect clothes and arrange daily meals for them with a little help from fellow villagers.

“Besides the local villagers, some people from adjoining areas also contributed in cash and the kind. But providing food on a daily basis remains a challenging task,” says local Catholic, Marian Phyu (not her real name).

“Shortly after the first group left the church compound after the situation in their village eased, another group turned up,” Phyu added.

The Catholic priests help in the arrangements, she added and Buddhist monks also make arrangements for providing food, especially for those taking refuge inside the monasteries.

There is an air of uncertainty too with the Catholic villagers here not knowing when a military raid or attack could target their village, forcing them to flee.

Fear and anxiety continue to build as they hear the sound of gunfire in nearby villages.

The raids began in early March compelling hundreds and thousands of Catholics and Buddhists who have lived together in the village peacefully for decades to flee.

Some deemed it safe to return within a month or so in early April.

“We have no idea when we will have to flee again as we hear gunfire on a daily basis as fighting continues in nearby villages,” said Joseph Mg (not his real name), another Catholic villager.

Catholic villagers in the Bamar heartland of Sagaing have been witnessing increasing resistance to the military junta by the local People’s Defense Force (PDF) groups.

The military, under the garb of flushing out the PDF members, has been focused on targeting and attacking churches, convents and civilian homes in the predominantly Christian region like Kayah, Chin, Karen and Kachin.

But even the Buddhist-majority Sagaing has been embattled with the junta troops razing at least 11,000 civilian homes by the end of April, according to a group that monitors the effect of political and armed conflicts in Myanmar since the military coup in February 2021.

Local media reported the discovery of 27 charred bodies inside burnt homes in two villages of Ye Oo township in the region recently.

Earlier, the Christmas Eve massacre in Hpruso township in Kayah state had claimed the lives of 35 civilians including women, children and two aid workers from Save the Children. The junta had set the victims’ bodies on fire, media reports said.

The United Nations Human Rights Office said in a report released in February that the junta has “utilized internationally acquired jet aircraft, combat helicopters, armored personnel vehicles, and missiles to target civilians,” and the “indiscriminate bombing of homes and villages” has been escalating.

The junta is struggling to consolidate power in the Southeast Asian nation amid growing resistance from newly emerging PDF groups, especially in Sagaing, Magway and Kayah and Chin states.

The ongoing conflict has displaced more than 590,000 people from their homes since the coup in February last, according to the United Nations High Commissioner for Refugees.

Christians in the conflict zone have played a significant role on the humanitarian front while also aiding the effort to restore back democracy.

Catholic bishops have said they are inspired by “the fellowship of all our Myanmar people, who compassionately welcomed the fleeing people, housed them and fed them.”

“This nation will be healed by such gestures,” they said in a joint statement in January while urging all Catholics to promote peace through intense prayers.

* Names have been changed and the village name was omitted for security reasons.