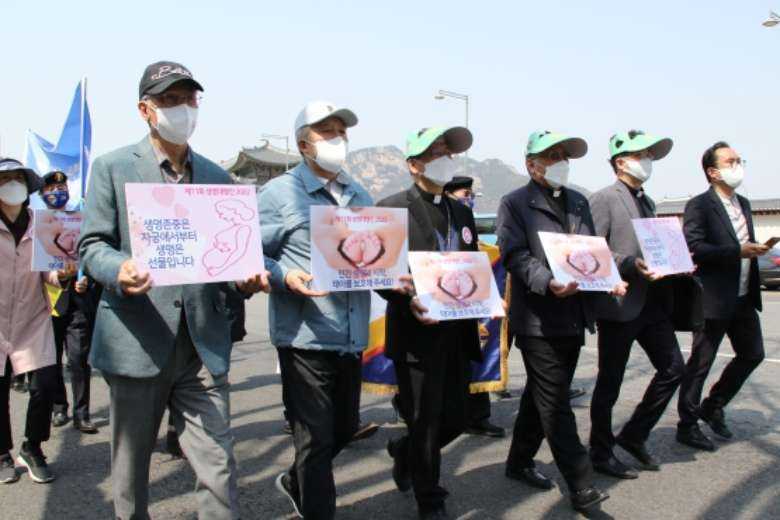 Some 400 South Korean Catholics joined by clergy and religious marched on the streets of capital Seoul to call for stronger efforts to protect life.

The annual “March for Life” was held on April 9 for the first time in three years due to the Covid-19 pandemic, Catholic Times of Korea reported on April 13.

Marchers held placards and slogans with pro-life slogans including “Respect life” and “Protect the fetus” during the one-hour rally.

Before joining the march, Catholics attended a program where videos containing congratulatory messages for the march were screened and experts delivered pro-life presentations. They also prepared pro-life slogans to chant during the rally.

Professor Agatha Kim Chan-ju, a specialist in obstetrics and gynecology at the Catholic University of Korea, Uijeongbu St. Mary's Hospital, showed a video with a fetus and the sounds of a heartbeat.

"Until we have a world without abortion, we will fight against this massive ‘culture of death’ and we must become advocates for the unborn child"

Professor Kim Jun-il from the Pro-Life Faculty Association explained how public perceptions regarding abortion had changed since the “Roe vs Wade” ruling in the United States.

Roe vs Wade is a prolonged legal case in which the US Supreme Court in 1973 ruled that the nation’s constitution protects a pregnant woman’s right to choose to have an abortion without government restriction.

Bishop Lee termed the ongoing pro-life movement as a “difficult pilgrimage” for the protection of life in modern times.

Patrick Kelly, a senior knight from the Knights of Columbus in the US, congratulated Korean Catholics for their efforts in defending life. "We must become a people who defend life, and many neighbors from all over the world will join us," he said.

Organizers vowed to continue their battle until abortion comes to the complete halt.

"Until we have a world without abortion, we will fight against this massive ‘culture of death’ and we must become advocates for the unborn child," said Ester Bae Jeong-soon, chairman of the Pro-Life Women's Association while reading out the “Manifesto for Life” during the event.

For decades, abortion was a bone of contention between pro-life and women's rights groups in South Korea where abortion has been legally banned.

A bill seeking to legalize abortion up to 14 weeks of pregnancy is underway. It would also allow abortion for pregnancies from rape in between the 15th and 24th weeks

South Korea’s Constitutional Court in 2019 ruled that criminalizing abortion was illegal and ordered the government to formulate a law to end the ban on abortion.

In line with the court verdict, the nation’s parliament passed legislation to decriminalize abortion and to repeal previous legal provisions that criminalized abortion.

A bill seeking to legalize abortion up to 14 weeks of pregnancy is underway. It would also allow abortion for pregnancies from rape in between the 15th and 24th weeks.

The Catholic Church has been at the forefront of the pro-life campaign based on the Church’s teaching on the “sacredness of human life” from the beginning to the end.

South Korean Church officials have strongly opposed legalized abortion and insisted that “the right to choose makes sense only when the state helps women first make choices about childbirth.”

In 2018, a church-backed anti-abortion petition gained one million signatures.

On Aug. 20, 2020, an eight-member Catholic delegation led by Cardinal Andrew Yeom Soo-jung, the former archbishop of Seoul, met with President Moon Jae-in to voice their concerns about legalizing abortion.

"If the law cannot prohibit abortion, at least a woman who intends to have an abortion must first hear about its psychological, physical and mental consequences through counseling before deciding," Cardinal Yeom said in a letter submitted to the president.