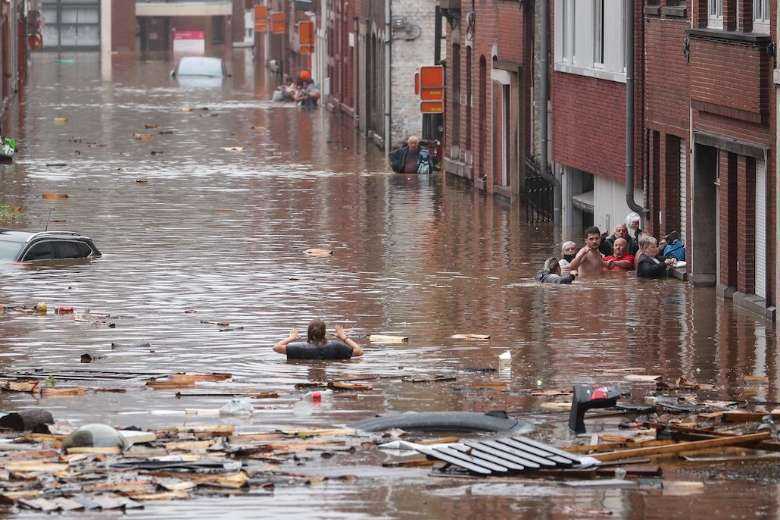 The archbishop of Cologne has celebrated Mass in one of the cities hardest hit by devastating floods in western Germany.

Cardinal Rainer Maria Woelki led a service in Erftstadt, a small city with 50,000 inhabitants, on July 18.

“We beg the Lord for his mercy. May God help us and may God help us to help each other,” said Cardinal Woelki, who returned from his vacation to reach out to people in his diocese.

The archbishop thanked emergency responders in the disaster area.

More than 150 people died when heavy rain turned minor rivers into devastating torrents in the region. Houses, cars and even parts of a motorway were torn away by the floods.

When the water hit Erftstadt, the Catholic Church was among the first responders.

The solidarity that we experience is overwhelming. People come from all sides to support us

“The morning right after the flood, we opened our church to shelter the people that could not return home,” a parishioner told Catholic radio station DOMRADIO.DE.

Around 80 people were evacuated to the church and nearby parish buildings. Several houses collapsed and more than 50 persons are missing in the city. Firefighters, relief organizations and the military are still searching for missing persons as well as securing buildings, bridges, and streets.

“The solidarity that we experience is overwhelming. People come from all sides to support us,” a parishioner told the radio station.

Even though in some areas there was neither electricity nor any means of communication for hours and days, the people stood united.

“We try to keep in touch by praying,” a pastoral worker told DOMRADIO.DE. “Every night at 7pm we say the Lord’s Prayer — wherever we are. And we think of those who are suffering.”

All over the region Catholic parishes, monasteries and religious centers overnight became shelters for evacuated individuals and families.

In response to the catastrophe, Cardinal Woelki issued emergency relief of 100,000 euro (US$118,000) to support victims and their families. Fifteen apartments in the diocesan seminary have been provided for people who lost their homes or cannot return until the clean-up operation has finished.

In the Ahr valley near Bonn, less than 80 kilometers from Erftstadt, more than 100 died in the floods. Thousands are left without homes.

In Aachen, Bishop Helmut Dieser launched a solidarity fund for families and children affected by flooding

“It is horrible to see the destruction,” Bishop Stephan Ackermann of Trier said when he visited Bad Neuenahr-Ahrweiler. “Cars are standing upright or piled up in gardens. It is horrific.”

In Aachen, Bishop Helmut Dieser launched a solidarity fund for families and children affected by flooding.

Weather extremes like the latest torrential rain are unusual in Germany. Most cities along rivers have issued distinct plans on how to react to high floods. The intensity of the recent floods was beyond expectations.

And still the danger is not over. Reservoir dams in the region have been damaged and are filled to overflowing.