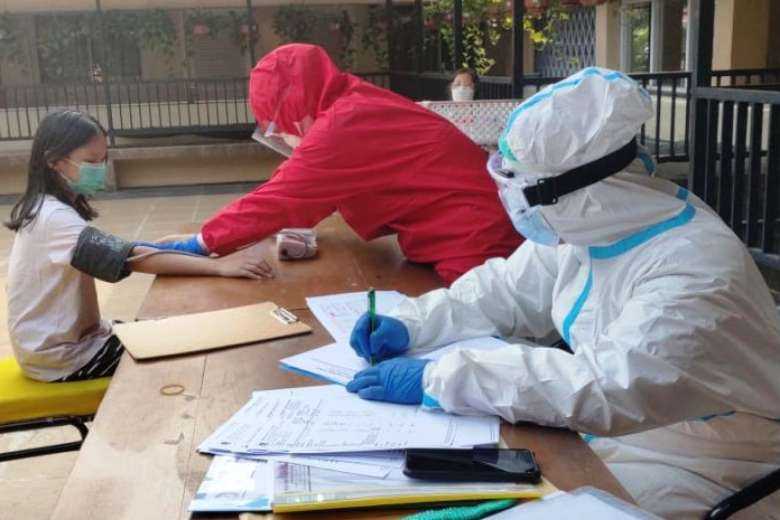 A girl living in self-isolation at Jakarta Archdiocese’s pastoral center has her blood pressure checked by a nurse. (Photo supplied)

Maria Diandra Marcia from St. Christophorus Church in West Jakarta was shocked to hear the result of a polymerase chain reaction (PCR) test she took early this month.

“I tested positive for Covid-19. I had been fully vaccinated and there were no symptoms at all,” she told UCA News.

The 20-year-old university student was the only one in her family to be infected by the coronavirus and went into self-isolation at Jakarta Archdiocese’s pastoral center in East Jakarta, starting on Aug. 8.

“I stayed all alone in a tidy and clean room. I could also enjoy the Wi-Fi network, which was very helpful as I had to continue my online studies,” she said.

She was also impressed by the dedicated service provided by doctors and nurses as well as the seminarians and employees of the pastoral center, called Wisma Samadi.

“It is great to see that the Catholic Church is doing something not only for Catholics but also for people from different religious backgrounds. This is proof of love,” said Marcia, who left the isolation ward after a full recovery on Aug. 21.

They treated all patients regardless of their religious backgrounds. I was so lucky to be treated here

Abdul Muiz, a 35-year-old Muslim, also appreciated the facilities provided in his room, including a bed, table, television, air conditioning and a water dispenser besides daily check-ups, morning exercises and spiritual guidance.

He underwent self-isolation for 14 days starting on Aug. 4. “The Catholic Church has a great sense of humanity,” he said. “They treated all patients regardless of their religious backgrounds. I was so lucky to be treated here.”

Marcia and Muiz were among more than 150 patients who recovered from Covid-19 at the facility conceived by Father Yustinus Ardianto, who serves as the pastoral center’s director.

Indonesia recorded its then highest daily Covid count on June 17 with 12,624 cases. Jakarta alone had 4,144 cases. Many found it hard to get medical treatment because hospitals were full.

“I asked for permission from Cardinal Ignatius Suharyo of Jakarta to convert the pastoral center into a self-isolation ward. He approved it,” Father Ardianto said.

On June 18, the self-isolation ward was opened offering free services for the disadvantaged. According to the priest, the number of Covid-19 cases rose steeply and decreased slowly, with fewer than six people currently in self-isolation.

Besides Wisma Samadi, six other self-isolation facilities are run by religious congregations and parishes in Jakarta Archdiocese.

One is run by nuns from the Congregation of Sisters of Charity of Saint Charles Borromeo in East Jakarta. Jesuit Father Christoforus Kristiono Puspo, chairman of the archdiocese’s Commission for Socio-Economic Development-Daya Dharma Institution, was behind the initiative introduced last month.

In July, driven by the more transmissible Delta variant, daily new cases in Indonesia reached more than 56,000, pushing its health system to the brink of collapse.

“We are concerned about those living in small houses. What if one of their family members tests positive for Covid-19?” the priest asked.

We take part in fighting for those in need. What we do is in line with our founder’s zeal for serving others

On July 28, St. Servatius Church in Bekasi, east of Jakarta, opened a self-isolation ward in cooperation with the local government and a Catholic senior high school.

“Besides our own doctors and nurses, we also receive help from the National Disaster Mitigation Agency’s Covid-19 volunteer desk,” said Yulius Kunto Wibisono, coordinator of the parish’s self-isolation facility.

Eleven patients, mostly non-Catholics, are currently in self-isolation there.

Meanwhile, Congregation of Our Lady of Charity of the Good Shepherd nuns in East Jakarta have converted five classrooms of a school they run into self-isolation wards since Aug. 7.

“We take part in fighting for those in need. What we do is in line with our founder’s zeal for serving others,” Sister Magdalena Rini said, adding that five people are currently admitted.

He felt the Catholic Church would be able to deal with similar situations in the future as they have built good networks, serving as a good example for others to follow.

He further acknowledged that Jakarta has seen infection rates drop in recent weeks but said that some other provinces, particularly those located outside Java island, are showing an increase in new cases.