Government told to return Ho Chi Minh City properties including a church and convent after 50,000 people were evicted 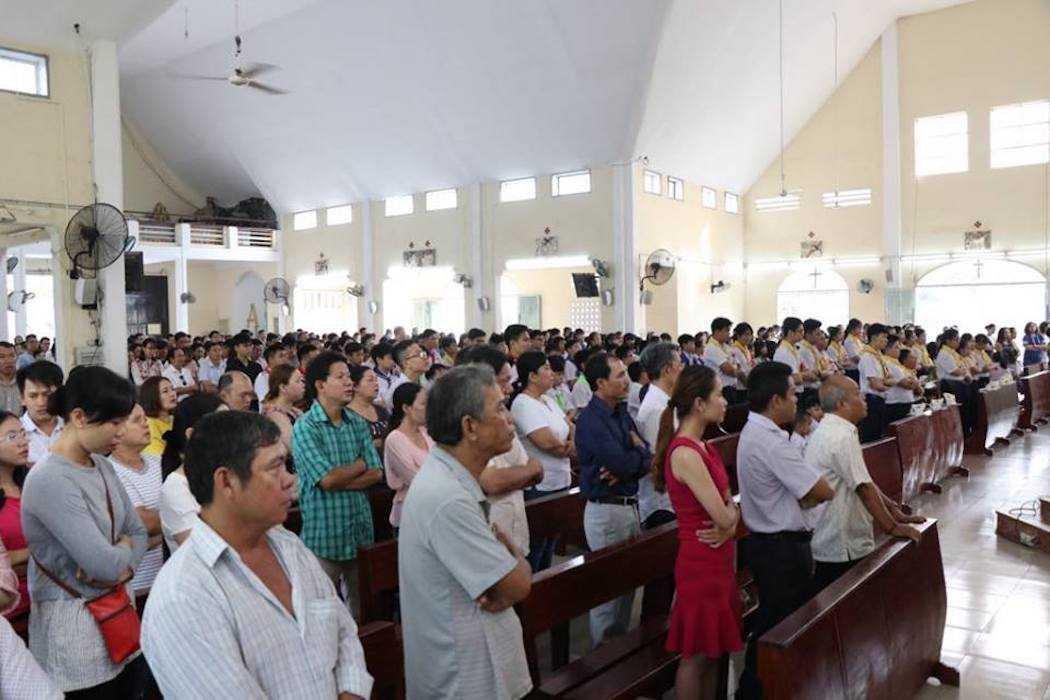 Catholics attend Sunday Mass at Thu Thiem Church on May 20. The 159-year-old parish is one of the oldest in Ho Chi Minh City. (Photo courtesy of Tin Mung Cho Nguoi Ngheo)

Activists and intellectuals including Catholics have asked the Vietnamese government to return properties to religious organizations and residents who were evicted from their homes in a highly controversial development project.

On May 1, Nguyen Thanh Phong, president of the People's Committee of Ho Chi Minh City, asked lower authorities to make plans to remove Thu Thiem Church and the convent of Lovers of the Holy Cross sisters from the new urban area of Thu Thiem so that investors can build roads and public gardens.

The two religious facilities, which have existed for more than 150 years, remain in an area expected to become an international trade and financial center. The area is surrounded by the Saigon River that borders District 1, Vietnam's largest urban commercial area. The project was approved by the late prime minister Vo Van Kiet in 1996.

About 50,000 residents have been forcibly removed or evicted from more than 10,000 properties. Authorities evicted many Buddhist monks from Lien Tri Pagoda and ruined it in 2016.

"Civil societies and individuals inside Vietnam as well as abroad formally request the government give Lien Tri Temple, Lovers of the Holy Cross Congregation and residents back their properties, which were not part of the urban expansion plan according to the prime minister's original directive," protesters said in a statement.

The statement issued on May 19 has drawn online signatures from 20 civil society, rights and democracy groups, 361 activists, former government officials and intellectuals including Bishop Paul Nguyen Thai Hop, head of the Episcopal Commission on Justice and Peace, and 11 priests and pastors.

They asked the government to make proper restitution for those whose properties were unfairly or illegally taken.

Their statement came after Prime Minister Nguyen Xuan Phuc admitted May 15 that local authorities made mistakes in managing project land, dealing with people's complaints and storing documents. He ordered authorities to ensure people have houses and to resolve their complaints properly and legally.

During a May 9 meeting with city authorities, hundreds of people bitterly complained that they were forcibly evicted from their homes and given inappropriate compensation payments. Many do not have enough money to live in new places and others have become homeless. Houses in relocated places are in bad condition.

Nguyen Ngoc Thanh, a victim, said she was given 94 million dong (US$4,140) in compensation for her 59-square-meter house but had to find 800 million dong to buy a house elsewhere.

The statement said the project showed that the rights to live and worship of thousands of residents have been seriously violated.

It said the city government showed how lawlessness has severely infected the current totalitarian regime, and the root of the problem is the constitutionalized notion that all land belongs to all people but shall be managed by the state.

The statement urged the government to stop immediately all illegal land grabbing carried out by local authorities against rightful owners. The government should prosecute to the maximum extent of the law those who are responsible for destroying people's lives, flouting the law and desecrating national values.

Signatories want to create an inspection panel including members of civil societies and land grab victims to thoroughly review the process of urban planning and monitor its execution across Vietnam.

They also asked for the constitution to be amended to allow both public and private ownership of land.