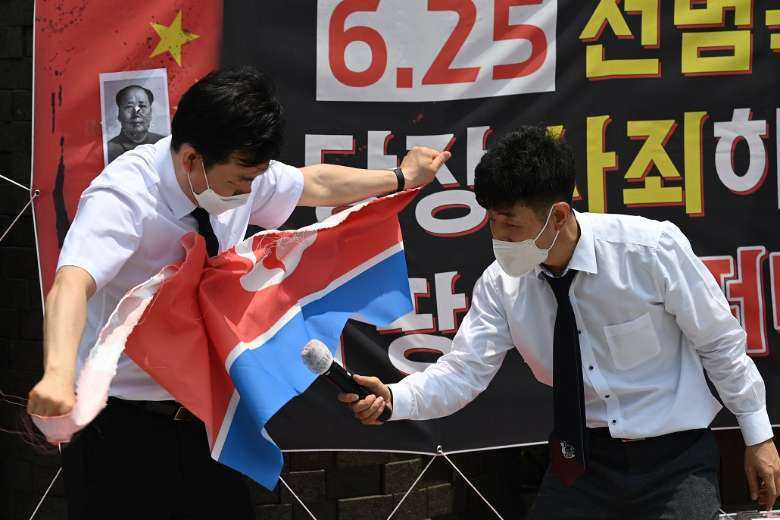 A South Korean protester tears a North Korean flag during a demonstration marking the 71st anniversary of the outbreak of the Korean War near the Chinese embassy in Seoul on June 25. (Photo: AFP)

Korean Catholics have prayed for peace and reconciliation on the divided Korean Peninsula on the 71st anniversary of the start of the Korean War.

Cardinal Andrew Yeom Su-jeong, archbishop of Seoul, celebrated a Mass on June 25 at Myeongdong Cathedral with the intent of praying for peace.

Seoul Archdiocese is the biggest diocese in South Korea with 1.52 million followers.

“We are offering a Mass to pray for reconciliation, unity and reunification of the nation in remembrance of the tragic war of kinship,” Cardinal Yeom said in his homily.

“Reconciliation and unity of our peoples are important for meeting our commitment to this mission of evangelization of the peninsula. Praying and working for peace are inseparable from evangelization.”

He quoted the words of Pope Francis: “Peace is not simply the absence of war. Eliminating the hotbeds of war is a natural condition for starting the journey to peace.”

“No process of peace can begin unless a genuine attitude of forgiveness takes root in the human heart,” Cardinal Yeom said, adding: “Without forgiveness, the wounds will only continue to deepen.”

The prelate, who is also apostolic administrator of the Diocese of Pyongyang in North Korea, called on people to recite the rosary for world peace, especially for peace on the Korean Peninsula.

Last year various dioceses in South Korea also held Masses on the 70th anniversary of the Korean War amid the pandemic by following safety measures.

The National Reconciliation Committee of the Archdiocese of Seoul holds the event annually as National Prayer Day after it was established by the Catholic Bishops’ Conference of Korea in 1965.

Nearly three million people died in the Korean War in which the peninsula lost 10 percent of its overall population between 1950 and 1953. Fighting ended on July 27, 1953, when the Korean Armistice Agreement was signed.

The agreement created a demilitarized zone to separate North Korea and South Korea and allowed the return of prisoners. However, no peace treaty was ever signed and the two Koreas are technically still at war, engaged in a frozen conflict.

An estimated 5.8 Catholics live in South Korea with the number of faithful increasing by close to 50 percent in the past 20 years, according to figures published by the Catholic Pastoral Institute of Korea in January 2020.