K.K. Shailaja, Kerala's health minister, lights a traditional lamp at the valedictory meeting of a church-organized workshop in Kochi on Feb. 21. Cardinal George Alencherry (right) is with other Catholic leaders. (Photo supplied)

A communist minister in India’s Kerala state says the Catholic Church’s efforts have helped to combat Covid-19 in the southern state, where the struggle continues.

K.K. Shailaja, Kerala’s health minister, said the Church has provided “unparalleled support and assistance” in the state’s fight against the pandemic.

“I hope it will continue in the coming days as well,” the minister said on Feb. 21 while addressing a two-day workshop organized by the laity commission of Kerala Catholic Bishops' Council (KCBC).

Shailaja said Catholic health institutions have always been a model for private health establishments. “I have always asked private players to learn from the Catholic hospitals on how to take care of the vulnerable and poor,” she said.

Besides collecting and donating funds to the government, Catholic dioceses and parishes also collaborated with local government systems in creating awareness about the pandemic and getting medical help to the needy.

The minister’s appreciation comes as her government struggles hard to contain a fresh wave of the pandemic in Kerala after effectively resisting the spread of the disease for almost a year after the first case was reported in January 2020.

Hundreds of new cases are being reported in Kerala, which along with Maharashtra state accounted for 74 percent of active Covid-19 cases in India as of Feb. 21.

Kerala has 58,590 active coronavirus cases and has recorded 4,089 deaths, according to the federal Ministry of Health and Family Welfare. The virus has infected 11 million people in India and killed 156,000.

While the Kerala government has been criticized for lowering its guard against the pandemic, Cardinal George Alencherry, head of the Eastern-rite Syro-Malabar Church, thanked Shailaja for her leadership. 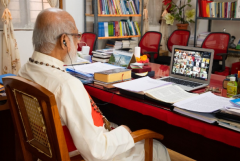 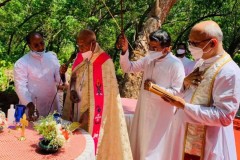 “When faced with a crisis, systems can become exhausted. But what made us all happy is the fact that the state government took on the crisis and converted it into an opportunity of service,” said Cardinal Alencherry, the bishops’ council president.

Soon after the first case was reported in India, Cardinal Alencherry wrote to Kerala Chief Minister Pinarayi Vijayan offering the services of the Church’s 250 health facilities in the state to fight the virus.

The Catholic Health Association of India (CHAI), which coordinates the work of 3,537 health institutions including 300 hospitals, five medical colleges, small clinics and dispensaries, had expressed readiness to use its facilities for the pandemic fight.

The Catholic Church in India manages the largest network of private health institutions in the country and offers some 50,000 beds, mostly in small towns and villages.