Thousands of Catholics go on pilgrimage in Sri Lanka

Through prayer and fasting, Christ's suffering is reflected upon during Lent A Way of the Cross station at St. Anne's Shrine in the Diocese of Chilaw, Sri Lanka. (Photo by Quintus Colombage)

It was not difficult for 20-year-old Nadeesh Mithuranga to rise at 3 a.m. to help his family load luggage into their vehicle for their Lenten pilgrimage.

Mithuranga was actually looking forward to the 330-kilometers drive to Higurana Calvary Church in Ampara, part of the Batticaloa Diocese.

As they left their Negombo home, Mithuranga's family sang Lenten hymns. Hours later they arrived at the destination.

"After reaching the church we conducted a Holy Hour exercise and we broke fasting," said Mithuranga.

For two days, his family stayed in a hall located on the church's property so they could participate in spiritual exercises such as Way of the Cross and spending time in prayer.

"I am a heart patient but it did not stop me observing fasting for two days," said Goretti. "The fasting made me both spiritually and physically strong," she said.

Mithuranga and his family's experience is a common one among many Sri Lankan Catholics during Lent, which began on Ash Wednesday, Feb. 10. In South Asia, All Souls' Day is also a tribute to ecumenism 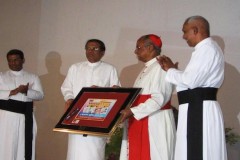 'Sometimes the sea was rough'

During the 40 days of Lent, Sri Lankan Catholics visit churches across the island nation. Once they also did so by sea.

Sebastian Peter Fernando said he went on pilgrimage by fishing boat when he was younger.

"We used to travel by catamarans and we would leave before sunrise," said the 67-year-old who used to make pilgrimages to the Thalawila St. Anne's Shrine in Chilaw Diocese.

Fernando said he and his friends sang hymns as they sailed the 180 kilometers to get to their goal.

"Sometimes the sea was rough and the journey was uncomfortable," he said. On one voyage, a catamaran capsized but thankfully everyone was rescued.

As they made their way along the coast, people on the shoreline would offer food.

"They call out to the pilgrims from their huts to provide them with lunch," Fernando said.

Upon reaching the Thalavila church they put up temporary huts and then spent several days performing spiritual activities.

"Catholics take this season seriously and engage in different spiritual practices," said Father Pillai. "As clergy we are more available to spiritually support them during this season," he said.

There are just 30 Catholic families in his parish situated in a Buddhist-dominant area.

"The Buddhists cooperate with us to assist the visiting pilgrims to have a successful stay," said Father Pillai.

The priest said that the Buddhists around the church make their land available during Lent for Catholics to park their vehicles.

The local Buddhists also never hesitate to assist visiting Catholics when they need water or to use toilet facilities, Father Pillai added.