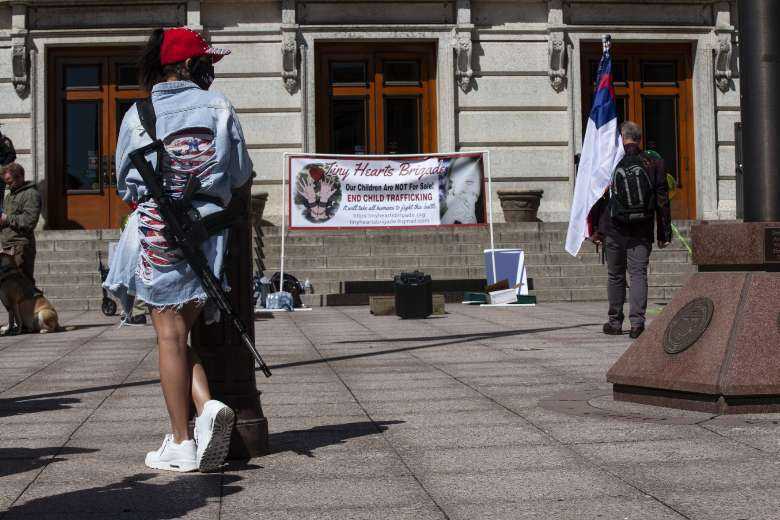 An armed demonstrator takes part in a rally in front of the Ohio Statehouse for the Tiny Hearts Brigade, a group against child human trafficking, in Columbus, Ohio on May 1, 2021. (Photo: AFP)

Church institutions and all Catholics can fight against modern-day slavery by making sure the products and services needed for their homes, parishes, schools and organizations adhere to ethical standards, a panel of anti-trafficking advocates said.

"We have to lead by example" for the rest of society, said Ivonne van de Kar, who is part of the RENATE network in the Netherlands of women religious fighting against human trafficking.

As an example, she said, when the church needs to employ outside workers -- everything from bus drivers and landscapers to construction workers -- it must be guaranteed "that we do not use slave labor."

"So many people are exploited," the church must make sure it does not inadvertently support those who exploit them, she said.

Van de Kar was one of several experts who spoke to the press online Feb. 9 at the end of the first European Regional Conference of the Santa Marta Group, which was held online Feb. 8-9.

Inspired and endorsed by Pope Francis, the Santa Marta Group was founded in 2014 to end the global web of trafficking and slavery with its own global network of senior law enforcement officers, bishops, members of religious orders and other partners.

About two dozen experts spoke at the online conference, which had more than 100 participants from 23 countries, to look at ways to eradicate trafficking and labor exploitation and improve care for victims in Europe.

The conference, co-sponsored by the German bishops' conference, was developing an action plan with recommendations for European political representatives and other stakeholders.

A top priority, speakers at the final news conference said, is helping people see this crime exists in their own backyard.

"Take a look at what you wear, what you buy, where it is produced," he said.

Auxiliary Bishop Ansgar Puff of Cologne said people are more likely to change their behavior if they are aware of the extent of the problem and how they can help.

For example, he said, plastic bags are no longer available in stores in Germany. The change came after people learned how much they harm the environment "and this is why people said, 'We don't want them anymore.'"

"This change in mindset also has to happen in the field of human trafficking," he said, so people will change the way they look at, consume and demand products and services.

Since so many traffickers have gone online because of the pandemic, the bishop said, the group should partner with Internet providers, and get them to block sites found to be recruiting people.

Archbishop Hesse said other recommendations in their call to action include providing the resources and "exit strategies" victims need to escape their traffickers and making it easier for those rescued to get into rehabilitation programs to start a new life.

Victims need easier access to the criminal justice system, he said, and there must be stiffer punishment including confiscating illegal profits and financial penalties levied for all forms of human trafficking so that it is no longer profitable or worth the risk.

"This is a true scandal. We need to put an end to this," said the archbishop. "Human trafficking must not pay off anymore."

Cardinal Vincent Nichols of Westminster, England, and president of the Santa Marta Group, said their work is a priority for Pope Francis.

The group, named after the pope's residence, "was born out of the conviction that bringing together decision-makers, building partnership and cooperation, particularly between law-enforcement and the resources of the church, brings huge benefits in fighting this crime and caring for its victims," he said, opening the conference online Feb. 8, the feast of St. Josephine Bakhita and the International Day of Prayer and Awareness Against Human Trafficking.

"It is a battle that at this present time is being lost," made worse by the effects of the pandemic, which has increased "the vulnerability of millions of people who thereby become ready targets for the traffickers," he said.

"We emerge from this pandemic, chastened, aware of weakness and systematic factures, and realizing that partnerships of so many types are essential," Cardinal Nichols said.