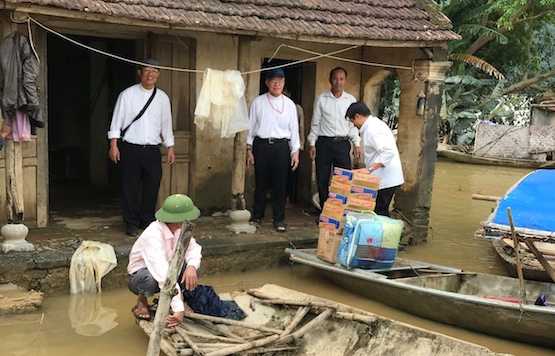 Large parts of the country's northern and northwest provinces were flooded by heavy rains from Oct. 10-12 and then further battered by Typhoon Khanun which hit Oct. 16.

The National Center for Hydro-Meteorological Forecasting said that the disastrous weather left 77 dead and 38 injured. Over 20 people remain missing. Nearly 250 houses collapsed and over 2,000 households were evacuated.

The floods, the worst in years, damaged 75,600 hectares of rice and other crops and large numbers of livestock also perished.

"We saw many places in the district still inundated. We had to travel by boat to offer instant noodles, rice, blankets and money to survivors to help them overcome hunger and the cold weather," Bishop Yen said.

Dozens of churches and facilities were inundated, he said.

Father Joseph Nguyen Trong Duong, parish priest of Nghia Lo in Yen Bai Province, said local Catholics offered relief aid to 24 families including Thai ethnic people at Pu Trang sub parish after the floods. Many of the Thai people had lost most of their possessions.

Father Duong said Caritas workers from other areas assisted with relief efforts. They supplied both aid and money to flood victims who have had to deal with other flooding disasters this year.

"Survivors of other faiths were moved to tears when they received supplies from Caritas workers who were the first people to console them," he said.

Thirty bishops who attended a national meeting in Thanh Hoa Bishop's House on Oct. 12, visited and offered aid to An Loc parishioners who were struggling with difficulties caused by the floods.

Vietnam is prone to destructive storms and flooding due to it long coastline. The country has been hit by 11 typhoons this year.