The vigil came just days after the Vietnamese government revealed that toxic waste linked to a steel factory hurt the livelihoods of more than 200,000 people. Some 100 tons of fish washed up in Central Vietnam’s shores in April as a result of the leak, sparking rare nationwide protests.

On July 29, the government announced Taiwanese plastics giant Formosa had paid the first half of a US$500 million fine to be used to clean the water and compensate those affected.

Catholics in Central Vietnam have been particularly outspoken, while Bishop Paul Nguyen Thai Hop of Vinh has come under fire for pushing for protests and investigation. 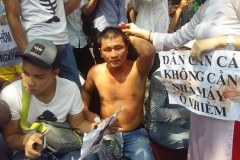