Destroying nature, polluting the air, water and land by toxic chemicals is committing crimes, they say 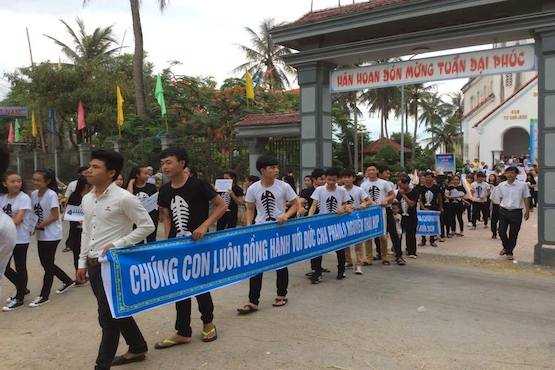 Catholics turned out in force in a central Vietnamese province on June 5 for a march to raise public awareness about the need to protect nature and to mark World Environment Day.

More than 1,000 Catholics from Phu Yen parish in Quynh Luu district of Nghe An province took part in the march.

After Sunday Mass, Catholics marched in two lines, singing hymns, waving flags and holding banners saying "environmental protection is a mandate of conscience," "Destroying the environment, polluting the air, water and land by toxic chemicals is committing crimes." Many other such banners were hung along the roadside.

The marchers stopped at a local fishing village and prayed for fishing communities to soon return to normalcy.

Father Anthony Dang Huu Nam, parish priest, said the demonstration aimed to show solidarity with the affected fishing communities and as a response to Bishop Paul Nguyen Thai Hop’s call for Catholics to make environmental protection a priority and to push for the rights of fisherfolk.

Bishop Hop also appealed to Catholics to donate 100 kilograms of rice to each family affected by the marine disaster.

Meanwhile, police moved in to break up protests in the capital Hanoi and Ho Chi Minh City in the south.

An increasingly angry public want greater government transparency over the fish deaths, which many blame on a Taiwanese company, Formosa, which has a steel plant near to where the fish died.

Many activists were detained or dragged away before they were able to get close to the rally sites, while others were taken away in buses.

Police moved quickly to avoid similar protests about the fish deaths in May, observers said.

Government officials announced on June 2 that an investigation investigation into the cause of the fish deaths was complete but further consultations with experts were needed before the findings are released later this month.

The marine catastrophe has killed over more than 100 tons of fish in Vietnam’s central waters seriously affecting local fishing communities since early April.

Farms in the Vung An Economic Zone in Ha Tinh province, started to see fish dying on April 6, while dead fish began washing ashore along 200 kilometers of the coastal provinces of Ha Tinh, Quang Binh, Quang Tri and Thua Thien Hue on April 10.