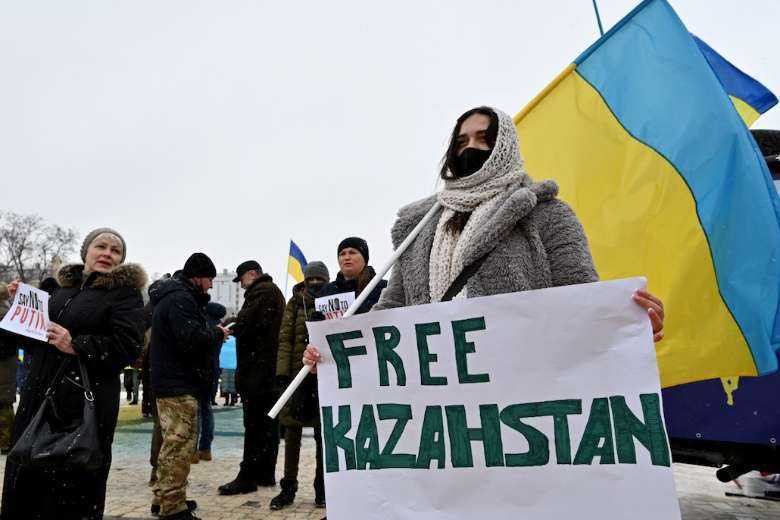 A Ukrainian woman holds a placard during an action dubbed #SayNOtoPutin in Kiev on Jan. 9. (Photo: AFP)

Catholics in Kazakhstan are safe and continue to pray for peace as the Central Asian country grapples with political unrest that has claimed dozens of lives.

In a message on social media site Twitter, Auxiliary Bishop Athanasius Schneider of the Archdiocese of St. Mary in Astana said Catholics remain unharmed from the current crisis.

“The Catholics in Kazakhstan are thanks to God safe,” Bishop Schneider wrote on Jan. 8.

“In our churches we continue to celebrate the Holy Mass, doing Eucharistic adoration and praying particularly for peace in our country and for harmony in the social life, which the Kazakh people desire.”

The Soviet-born ethnic German bishop also appealed for an end to violence and for a peaceful solution to the political turmoil.

Anti-government protests erupted in Kazakhstan on Jan. 2 following a steep hike in fuel prices. The price of liquefied natural gas (LNG), which is mostly used in cars, doubled from 60 tenge (14 US cents) to 120 tenge per liter.

Protests began in the city of Zhanaozen and spread to other cities including Almaty, the country’s largest city, business hub and former capital.

President Tokayev declared a nationwide state of emergency, said the demonstrations were fueled by bandits and terrorists with foreign links and ordered security forces to “shoot without warning,” triggering condemnation from the international community and rights groups.

Russian and state media reported that at least 164 people including 16 members of the security forces have been killed during the unrest. Protesters reportedly attacked public buildings and clashed with security forces who retaliated with live fire. Nearly 6,000 people have been arrested amid a security crackdown.

The government summoned and deployed troops from the Collective Security Treaty Organization, a Russia-led security alliance of ex-Soviet states.

US Secretary of State Antony Blinken called for “a peaceful, rights-respecting resolution to the crisis” and questioned why Kazakhstan had to summon Russia-led forces to quell domestic protests.

In a statement on Jan. 7, Human Rights Watch called for an immediate cancellation of the “shoot without warming” order and urged authorities to ensure all allegations of abuse and unlawful killings are promptly, independently and thoroughly investigated.

“Kazakhstan is in the midst of its most violent crisis since independence and the world is watching to see if the government will show it respects its people’s basic human rights,” said Letta Tayler, an associate crisis and conflict director at Human Rights Watch.

“It is crucial for Kazakh authorities to ensure that all security forces on the ground act with a view to safeguarding human life and are held accountable if they don’t. This starts with immediately canceling the ‘shoot without warning’ order.”

An estimated 250,000 Catholics are in Kazakhstan, with many being ethnic Poles, Germans, Lithuanians and descendants of Russian Catholics

Kazakhstan is a landlocked Muslim-majority country of about 19 million bordered by Russia, China, Kyrgyzstan, Uzbekistan and Turkmenistan.

For nearly three decades since independence from the Soviet Union, Kazakhstan has been under authoritarian rule. President Nursultan Nazarbayev ruled from 1990 until his resignation in March 2019 without any effective opposition party. President Tokayev was handpicked by Nazarbayev and continues his legacy.

Kazakhstan has a significant concentration of Russian Orthodox Christians.

An estimated 250,000 Catholics are in Kazakhstan, with many being ethnic Poles, Germans, Lithuanians and descendants of Russian Catholics deported during the rule of Soviet dictator Joseph Stalin.

Most Catholics are followers of the Latin-rite church and only about 3,000 are Eastern-rite.

Pope John Paul was the first pope to visit Kazakhstan in 2001. Pope Francis recently approved the new regional episcopal conference for central Asia that covers Kazakhstan, Uzbekistan, Kyrgyzstan, Turkmenistan and Tajikistan. The pope reportedly considered a trip to Kazakhstan before the Covid-19 pandemic.