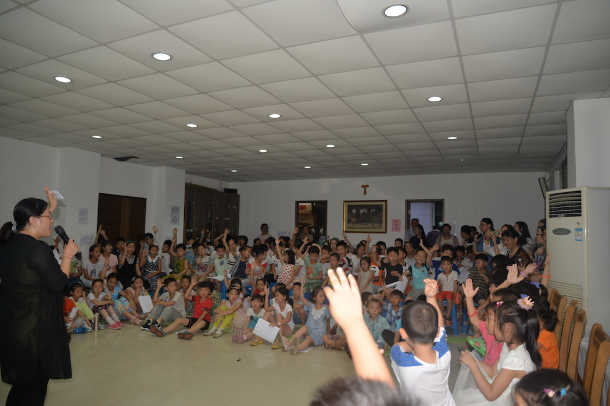 Catholics in Nanjing hold a summer camp for children in 2016. (Photo Supplied)

Communist authorities in mainland China are exerting a clampdown on Christian activities in the country, spreading fear among some church members about their long-term futures.

Dioceses in China have been receiving constant warnings about a prohibition on summer camps and many local churches have been pressured into giving up all related activities.

Some church members worry about the impact this will have on church development.

Some dioceses or parishes have routinely organized camps for students every summer vacation, aiming at cultivating their faith. In recent years, however, the authorities have addressed the issue of religious belief among young people, not only banning minors from entering churches but also forbidding churches from even staging summer camps.

Two dioceses had organized summer camps in northern China this year but only one was successfully held, while the other had to be cancelled.

A member of this diocese, who we can only name as John, told ucanews.com that the first camp was successfully held because church staff invited church members privately. When the diocese openly promoted the second one, however, the government banned it.

John said there was no problem if parishes organized camps privately and only publicized them after the event. “It’s alright if the camp is held privately but once it goes public, it isn’t allowed. It must take place in secret,” he said.

Another church member told ucanews.com that a diocese also in China’s north planned to organize a summer class at a big parish, but they moved it to a small parish in a rural village for fear of the authorities finding out about it. Another image of the Nanjing summer camp for Catholic children in 2016. (Photo Supplied)

John noted that some dioceses in the same province do not promote the classes as being for educational reasons, instead saying that “working parents are unable to take care of their kids during the summer vacation, so the parish is able to organize summer activities for the children instead.”

He pointed out that the government would not allow churches to organize any activities for children that it deemed to be educational, adding: “Even if they apply according to their [government] rules, they wouldn’t be approved.”

In China’s south, a Catholic businessperson who started an underground prayer class wanted to also hold summer bible classes but dropped the idea for fear of being caught by the authorities.

Another lay Catholic, Peter, told ucanews.com that in previous years, this businessperson had also organized two classes for students, one overseas and another in his local office, with accommodation provided for the students and teachers hired from Hong Kong.

This year, he said, the plan was the same as in previous years — one was held overseas but the local one was cancelled. “I also applied for my kid, but the businessperson later said that ‘because the recent atmosphere has become worse,’ it had to be cancelled,” said Peter.

He thought the cancellation was due to the businessperson “feeling a lot of pressure and feared for the repercussions on his business.” He explained that because the company providing the “camp site” was a large taxpayer who has close ties with the authorities, “he may not want the government to know that his company was gathering so many children for religious activities.”

Children brainwashed to love the party

Another member, Joseph, expressed his hope that the Church could continue to organize summer camps to cultivate faith among children and not only lay good foundations for church development but also enable kids to form healthy views about life from a young age.

He said the Chinese Communist Party (CCP) had been responsible for brainwashing in education for some decades and that those taught by the party had grown up to become egotistical people lacking in moral fiber, some even becoming extreme and parochial nationalists. This was the ruination of some people’s lives, he said.

John added that the CCP’s intention in clamping down on the summer camps was to disconnect children from the Church. This would thus enable the party to carry on brainwashing the children, who then become their pawns. It would also cut off the Church’s bloodline, as it would be unable to develop, so the CCP would achieve its goal of manipulating people’s religious beliefs.

On the cancellation of bible classes and summer camps, John said: “Some must be due to self-censorship, but some are called off because people are tipping off the authorities. I believe the one we failed to organize was reported to them; there is always a neighborhood committee member or someone else hanging around churches.”

He thought there were only two types of informants: someone who lived and socialized locally, or an insider. The motives for these informants were various, he believed.

“One might be bribed, another brainwashed into thinking he is preventing harm, and another might be due to internal strife,” he said.

“Internal strife is very normal in the Church. Some people may report anyone he or she is not happy with. This is also the badness of the mainland Chinese, who simply live to enjoy themselves without caring whether others live or die,” he said frankly.