Catholic leaders in Belarus welcomed a new head for its archdiocese after a nine-month interregnum, although some activists warned the new archbishop could be constrained in opposing repression in the former Soviet republic.

Father Yuri Sanko, spokesman for the Belarusian bishops' conference, said Archbishop Staneuski has "always presented himself as a true pastor for everyone."

"As someone who lives entirely for the church, he's a worthy candidate for this key position who'll be able to lead the church toward new ways of developing," Father Sanko told Catholic News Service Sept. 15.

The spokesman said Archbishop Kondrusiewicz would continue preaching and attending bishops' conference meetings, while his successor, who was one of the first priests trained at Grodno's newly created seminary in the 1990s, took time "planning new steps."

Ihar Baranouski, an online editor from Belarus' Eastern Catholic Church, told CNS that most Catholics saw the appointment as a positive sign, adding that Archbishop Staneuski's fluency in Polish and Belarusian was being welcome as the government of President Alexander Lukashenko promoted a "general Russification" of religious life.

"Bishop Staneuski has the reputation of a very pious man, who's also open-minded and sociable," Baranouski said. "Although he won't be so emotional in his speeches and homilies as Archbishop Kondrusiewicz, his cautiously critical past reactions to the authorities and principled condemnation to Kondrusiewicz's mistreatment give grounds for hope he'll not deviate from Catholic social teaching."

Archbishop Staneuski's appointment comes amid continued repression following the August 2020 discredited reelection of Lukashenko after 26 years in power. It also followed tension over a Sept. 7 cartoon in an official newspaper equating Catholic clergy with Nazis.

Meanwhile, in a Sept. 13 report, the Poland-based news agency Belsat said new public order charges had been lodged against Volha Zalatar, a 39-year-old Catholic mother of five young children, who was detained in March while taking her daughter to a music lesson for allegedly "creating an extremist formation."

The agency said Zalatar, who faces up to 20 years' jail, had joined in demonstrations after the 2020 election and helped the families of arrested protesters, but had been beaten and tortured to force her "confession" after having evidence planted by police. Belarus says it will allow archbishop to return for Christmas 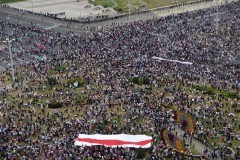 Father Sanko told CNS clergy were denied access to prisons and could only help detained Catholics by "praying continually" and "using every opportunity to make the church's voice heard" on their behalf.

Baranouski said Zalatar was "far from the only Christian suffering persecution in prison for her views," and agreed that church leaders could currently "do little other than showing concern with symbolic forms of support."

"But the church and Vatican should also be paying attention, with human rights organizations, to the harsh, inhumane conditions facing political prisoners here, who are deprived of even the minimum allowed for ordinary prisoners," Baranouski told CNS. "They should demand Lukashenko's officials stop torturing prisoners for political reasons and show mercy to their opponents in what the regime cynically calls this Year of Unity."