Catholics get all brotherly with Hindus in Madhya Pradesh Archbishop Leo Cornelio of Bhopal has a thread tied to his wrist by a Hindu schoolgirl, accepting him as a brother at a function organized by his archdiocese in Bhopal to celebrate the Rakshabandhan (festival of siblings), on Aug. 7. (Photo supplied)

The festival celebrates the bond between siblings by sisters tying a sacred threat on the wrist of brothers, or men who they consider as brothers.

Donate to UCA News with a small contribution of your choice
Several schoolgirls tied decorative threads on the writs of Archbishop Cornelio and other religious leaders during the special gathering the archdiocese organized in the state capital Bhopal.

"We are all sisters and brothers of one family, as we are the sons and daughters of one God. This festival goes beyond any religion and country to love and trust each other," the bishop said as he called on people not to commit acts that cause "distrust and sectarian divisions."

The Madhya Pradesh state government is led by the pro-Hindu Bharatiya Janata Party which has been accused by Christian leaders of turning a blind eye to radical Hindu groups intimidating religious minorities in their rush to build a Hindu-only India. 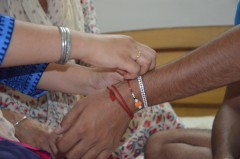