The battle between the underground and state-sanctioned churches continues in China after a bishop was detained for the sixth time.

Authorities in communist China have allegedly kidnapped a Catholic bishop who was previously arrested several times for refusing to break ties with the Vatican and join state-controlled church bodies.

Media reports said Bishop Peter Shao Zhumin of Yongjia Diocese in Zhejiang province in eastern China was detained and the reason for the detention and the whereabouts of the 58-year-old bishop remain unknown.

It is the sixth time Bishop Shao has been detained since 2016 following the death of his predecessor Bishop Vincent Zhu Weifang. He was ordained as the coadjutor bishop of Yongjia in November 2011 with Vatican approval.

However, he fell out with the government as his appointment was not approved by two state-sanctioned church bodies — the Bishops' Conference of the Catholic Church in China and Chinese Catholic Patriotic Association. Following his arrest in May 2017, he was detained for seven months. Two Korean Catholic nuns are languishing in a jail in Nepal more than six weeks after police arrested them on charges of conversion.

Sister Gemma Lucia Kim and Sister Martha Park Byongsuk of the Sisters of St. Paul of Chartres congregation were arrested on September 14. They were kept in police custody until September 27 and sent to a district prison after bail was denied. The nuns work among poor slum children in Pokhara, about 200 kilometers from capital Kathmandu. Bishop Paul Simick, apostolic vicar of Nepal, said the Catholic community was shocked over the arrest and bail denial of the elderly nuns. He said the allegation against the nuns is baseless and unjust.

Police also arrested two other Koreans — a lay Catholic and a Protestant pastor — on similar charges. Rights groups have documented increased hostility against Christians in Hindu-majority Nepal since it amended its Penal Code in 2018 to outlaw conversion.

The anti money laundering agency, Enforcement Directorate has launched an investigation into the sale of church land resulting in a loss of 10 million US dollars to the Archdiocese of Ernakulam-Angamaly in Kerala state. A church official said the move is a part of a conspiracy to tarnish the church and its leader as a local court and a special police team cleared the cardinal of any wrongdoing.

In 2017, a group of priests in the archdiocese accused Cardinal Alencherry of bypassing church rules and selling off several plots of land at a massive financial loss. The Vatican also probed the cardinal and removed him from the post of archbishop, but he remains the head of the church.

Deadly street violence erupted in Muridke city of Pakistan as thousands of members of a radical Islamist party clashed with police. At least 10 people including three policemen have died since last week as some 7,000 supporters of TLP or Tehreek-e-Labbaik Pakistan blocked roads.

The banned outfit is demanding the release of its leader Saad Hussain Rizvi and the expulsion of the French ambassador over cartoons depicting the Prophet Muhammad. Rizvi was arrested in April and the TLP was banned following violent anti-France protests. The federal government has released about 350 TLP activists and announced cases against others would be withdrawn. In April, TLP held rallies for days, leaving roads paralyzed and six police officers dead in violent clashes.

The international community has urged the ASEAN or Association of Southeast Asian Nations to take concrete action to hold Myanmar’s military junta accountable to bring an end to the country’s political crisis.

ASEAN Parliamentarians for Human Rights made the appeal as it held a three-day summit with world leaders including US President Joe Biden with Myanmar top on the agenda. The 10-member ASEAN bloc barred Myanmar’s military chief Min Aung Hlaing from attending the summit this week. About 1,200 people have been killed by the junta since the coup in a bloody crackdown against anti-coup protesters and civil resistance groups in urban and rural areas.

Tens of thousands of people, including ethnic communities in Christian-majority states, have been displaced and thousands have fled to neighboring India and Thailand. Hundreds of economic migrants who fled to Thailand to evade endemic poverty have been arrested in recent weeks.

A court in Cambodia has sentenced 10 youth activists and four former supporters of Cambodia National Rescue Party or CNRP, a banned opposition political party, to 20 months to two years in jail.

The Phnom Penh Municipal Court found them guilty of incitement for demanding the release of jailed trade unionist and rights activist Rong Chhun. The court, however, acquitted retired Australian politician Hong Lim, who was tried in absentia on the same charges. Hong Lim was banned from entering Cambodia in 2016 after criticizing authoritarian Prime Minister Hun Sen following the murder of Kem Ley, a close friend and prominent broadcaster who was shot dead in Phnom Penh.

Hun Sen’s ruling Cambodia People’s Party won every seat contested in the 2018 election, turning the nation into a one-party state. The CNRP was dissolved, its leader Sam Rainsy forced into exile and more than 100 activists arrested.

The Catholic Church in the Philippines has permanently relieved three priests from pastoral and priestly duties after they declared their intention to run for public office in elections next year.

The Catholic Bishops’ Conference of the Philippines (CBCB) said on Tuesday that the decrees of sanction from respective diocesan bishops were sent to the trio, Father Noli Alparce of Sorsogon Diocese, Father Emergon Luego of Tagum Diocese and Father Granwell Pitapit of Libmanan Diocese. The CBCB statement noted that the Church was obliged to act as canon law prohibits priests from assuming public office and participating in the exercise of civil power. Simultaneously, the priests were also stripped of their roles in various church agencies such as Caritas.

Father Alparce said he had filed his candidacy to run as a councilor in Albay province, while Father Luego quit the priesthood to run for mayor in Mabini, a town in Davao province.

A daughter of Indonesia’s first president Soekarno has made headlines after she converted to Hinduism from Islam.

Diah Mutiara Sukmawati Soekarnoputri, the third daughter of Soekarno, officially became a Hindu on Tuesday during a ceremony in predominantly Hindu Bali province in the world’s largest Muslim-majority country. The ceremony on her 70th birthday was held amid tight security in the presence of some 50 guests, mostly family members. Media reports say Sukmawati, the founder of the Indonesian National Party and sister of the country’s fifth president, Megawati Soekarnoputri, decided to become a Hindu because her Balinese grandmother had been a devotee. Sukmawati was accused of making "blasphemous” remarks about Islam in 2018.

Several groups complained to police over a poem she wrote and read during a fashion event that allegedly mocked Sharia law, the niqab face veil and the Muslim call to prayer. In 2019, she faced another police complaint for comparing her father with Prophet Muhammad.

Taiwan’s government has dismissed media reports that the nation’s relationship with the Vatican was under strain due to China’s pressure. Taiwan and the Vatican continue to have a friendly relationship through sturdy communication channels, Ministry of Foreign Affairs said.

The response came a day after Corriere della Sera, Italy’s most circulated newspaper, reported that Beijing wants the Vatican to break its diplomatic relationship with Taiwan in exchange for official ties with China. Taiwan is an independent and democratic nation but China still considers Taiwan as one of its provinces and has threatened to annex it militarily. China’s military pressure has intensified in recent weeks, with Taiwan claiming over 150 Chinese warplanes violated the nation’s air defense zone amid rising fears of a Chinese invasion. Taiwan does not have sovereign status at the United Nations due to China’s opposition. 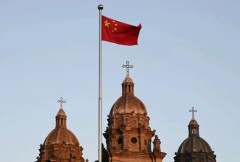 Indian Christians on target in the guise of conversions Another journalist killing adds to grim toll in Philippines