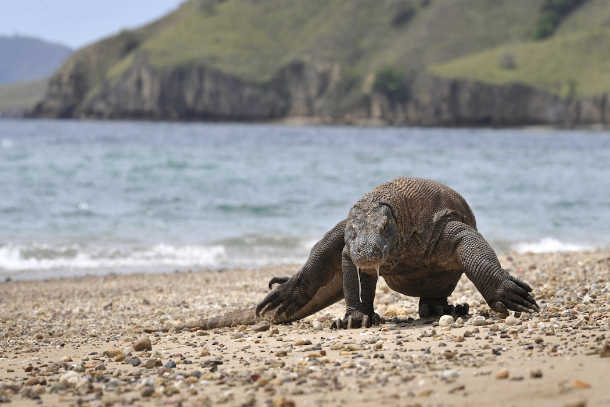 The move followed a meeting on Aug. 10 between Environment and Forestry Minister Siti Nurbaya and a group of Catholic environmentalists, including a priest, in which they urged the minister to intervene and stop the development "before it was too late."

The minister said she would form a team to investigate. "It will consist of government and civil society groups. The first task would be to immediately review the permits," Nurbaya said. "Conservation takes precedence over investment."

Segara Komodo Lestari had started construction on Rinca Island but stopped after around 1,000 activists and local people protested on Aug. 6.

The locals — mostly Catholics — are concerned that development would endanger the Komodo dragon, the world's largest lizard, whose numbers dropped from 3,012 in 2016 to 2,762 last year.

They also said resorts would be detrimental to the national park, which was selected as one of the New7 Wonders of Nature in 2012.

Franciscan Father Peter C. Aman, who attended the Aug. 10 meeting, said the proposed development was in conflict with the government's conservation mission.

"On the one hand, the government wants to preserve the dragons, but at the same time it issues [business] permits that threaten their habitat," he said.

Yosef Berty Fernandez, a lay leader and former Indonesian ambassador to Peru and Bolivia, said resorts would damage the ecosystem in the national park. "We do not reject investors but they should do business in areas outside the dragons' habitat," he said.

Rafael Todowela, a tour guide, said local and foreign visitors to the park also wanted it to remain natural, without being "contaminated by the presence of unnecessary buildings."

Gregorius Afioma, from Sunspirit for Justice and Peace, a local NGO helping farmers and the marginalized, expressed disbelief permits had been issued despite local communities having been being strictly prohibited from doing anything in or around the islands since they became a national park in the 1990s. Some people had been shot dead for trespassing, he said.

"Now the government is rolling out the red carpet for investors to enter the area," Afioma said. "It only exacerbates injustice for local people."