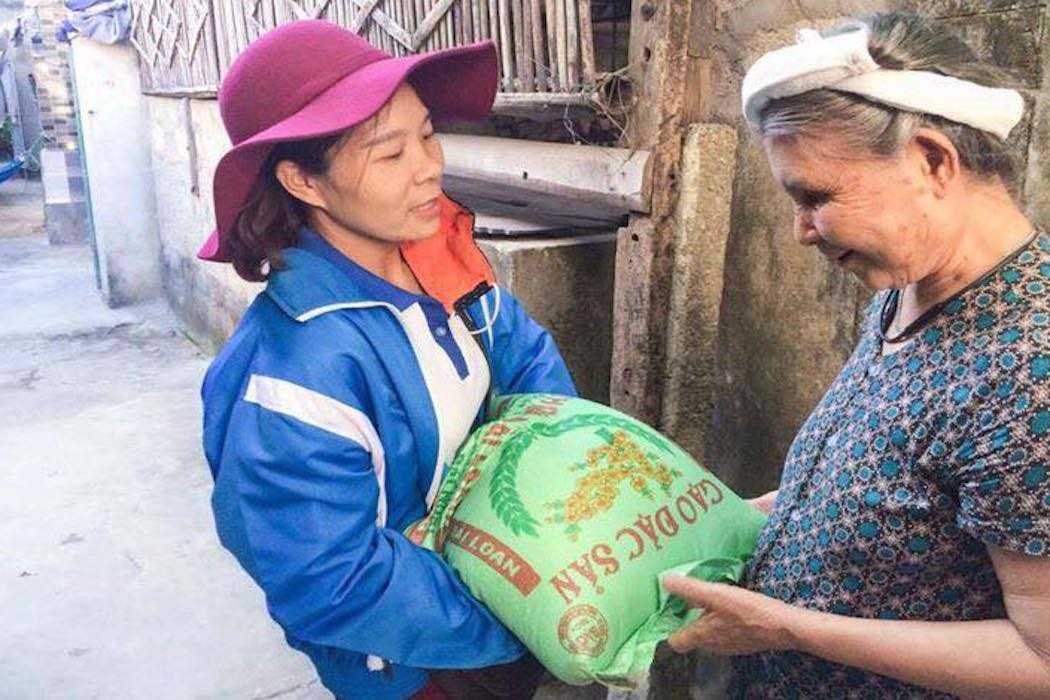 Teresa Tran Thi Xuan (left) offers a bag of rice to an elderly woman before her arrest in October 2017. (Photo courtesy of giaophanvinh.net)

Thousands of Catholics including priests have petitioned top officials to reassess the case of a jailed Vietnamese activist.

Teresa Tran Thi Xuan, who worked for the rights of victims of the marine disaster caused by a Taiwanese-owned steel plant in 2016, was sentenced to nine years in prison on April 12 and another five years on probation for conducting activities to overthrow the communist government. She was arrested last October.

Ha Tinh province was badly affected by the worst ecological disaster in the country's history. Toxic waste, including phenol and cyanide, from the Formosa Plastics Group's plant poisoned water along a 200-kilometer stretch of coastline, killing hundreds of tonnes of fish.

During the process of arresting, detaining, trying and incarcerating Xuan, officers and authorities "had brutally violated criminal procedures and severely infringed on the rights and legal interests of Xuan and her family members," said Father Michael Hoang Xuan Huong, head of Van Hanh deanery covering Ha Tinh city and the districts of Loc Ha and Thach Ha.

Father Huong, representing 44,000 local Catholics and priests, said in a petition that local authorities have not allowed family members to meet Xuan since her arrest. Lawyers were not given access to meet her or defend her at the trial.

He also accused the People's Court of Ha Tinh of trying the case secretly because it did not inform her family about the trial and used police to block all roads leading to the court.

Petitioners said Xuan, 42, from Loc Ha district of Ha Tinh province, is "a good citizen and a Catholic who lives a simple life and sacrifices herself for the poor and victims of the marine disaster."

They questioned if the case was revenge on those who have protected marine pollution victims' rights and interests, influenced by interest groups who wanted to hide crimes of damaging the environment and human health.

They added that authorities' violations show partly the answer to the question.

They asked government agencies to review the case and return justice to Xuan and her family. They also demanded severe punishment for officials who intentionally distorted and violated laws.

"We priests and Catholics always accompany Xuan in doing useful activities to console the destitute and protect the environment. We firmly ask the government to deal with our complaints so as to ensure civil rights are respected before the law," petitioners said.