Indonesian President Joko Widodo talks with victims of a deadly earthquake on Lombok Island. The 6.4 magnitude quake hit the area on July 29, killing at least 16 people. (Photo courtesy of Cabinet Secretariat of Indonesia)

Catholic groups have started to collect aid for thousands of people affected by a deadly earthquake that recently hit Indonesia's popular tourist island of Lombok.

The 6.4 magnitude quake struck the island on July 29 and killed at least 16 people, left 355 people injured and forced more than 5,100 people to flee their homes, according to the National Disaster Mitigation Agency.

Up until July 30, 276 aftershocks had hit the island and other areas in West Nusa Tenggara province.

"St. Anthony Catholic Hospital has sent teams of medical workers to serve those affected by the quake in Sembalun sub-district, the worst-hit area," he said.

He said his parish's emergency response team — along with teams from Denpasar Diocese and the Mataram chapter of the Union of Catholic University Students of the Republic of Indonesia — went to the district on July 31.

"We had to assess the current situation and what aid the victims really need. We're focusing on things government and other organizations tend to overlook," he said.

Father Evensius Dewantoro, who heads the diocese's Socio-Economic Development Commission, said the teams would stay there for three days. 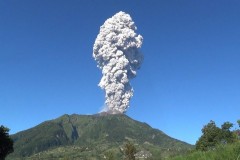 "Then we will submit recommendations to the bishop and Caritas Indonesia," he said.

"We've also received financial aid. We will use the money to buy necessities victims most need, such as blankets," he said, adding the aid will be distributed to victims next week.

According to media reports, at least 543 hikers, many of whom were foreigners, were evacuated by rescue teams from Indonesia's second highest active volcano.