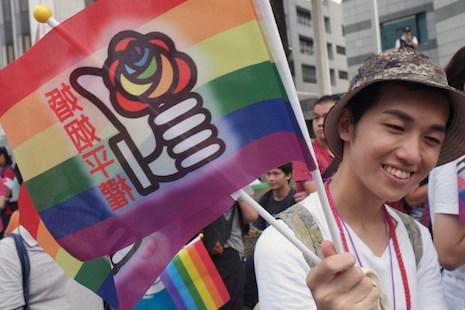 A protester displays rainbow flags during a demonstration to demand same-sex marriage rights in Taipei on July 11. Hundreds of people marched in support of a controversial bill on same-sex marriage. (Photo by Sam Yeh/AFP)

Share this article :
A Taiwan Ministry of Justice poll on granting marriage rights to gay couples has drawn tens of thousands of positive responses since its launch early this month. But some Catholics have criticized the poll saying it is far from an accurate representation of popular opinion. More than 27,000 people, representing 70 percent of respondents, have voted in favor of legalizing gay marriage since the 90-day poll was posted Aug. 3. The three questions asked are: “Do you agree to implementing a same-sex marriage law”, “Do you agree to implementing a same-sex partnership law” and “Do you agree to giving homosexuals a relationship that's 'similar to a marriage' or 'marriage' through legislation to protect their rights and legal status?” Taipei legislators have been drafting same-sex marriage bills in the wake of a United States Supreme Court decision that legalized same-sex marriage in every state. Should the bills pass, Taiwan would be the first in Asia to legalize gay marriage. While the response has been heavily in favor of legalization, some voters say loopholes in the online poll paint an inaccurate picture.
Related News Philippines says in spite of US decision, no gay marriage anytime soon

Father Otfried Chan, secretary-general of the bishops’ conference in Taiwan, told ucanews.com that he doubted whether the poll could fully reflect the opinions of Taiwanese people if no verification of citizenship is required. “So even foreigners can determine the future of Taiwan,” he said. The poll requires only an email address or Facebook page to cast a vote. “The poll is also unfair to the majority at the grassroots level, especially the elderly. We have many elderly Catholics who don’t know how to participate in an online poll,” said the priest. Paul Chiu Ping-cheng, a 35-year-old Catholic, said the poll results could be easily manipulated as one can vote repeatedly with different accounts. “For those who are working in China, they may not be able to participate in the voting due to the Great Firewall in China,” he added. Both Chiu and Father Chan said they felt the poll was just an appeasing act by the government before the 2016 presidential elections. “The government wants to show the public that they have done something,” said Chiu, who thinks that a referendum should take place instead. “The same-sex marriage campaigners know they will lose in a referendum and thus prefer running an online poll,” he added. Hang Yi-chen, a 24-year-old who is bisexual, said she, too, was skeptical about the poll. “No one knows how the Justice Ministry will use the result. I will oppose it if it is used for formulating policy. A human rights issue should not be determined by voting,” she told ucanews.com. “It should not design simple yes or no answers even if it is for collecting opinions,” she added. Hang also criticized the questions saying they were ambiguously written and, thus, confusing. “Even many in the LGBT group misunderstood [whether] the ministry is to formulate a separate law for same-sex marriage, which we see as more discriminating,” she said, noting that “what we want is an amendment to the civil law”. A Catholic student leader who is sympathetic to the issue also worried about “being represented” in the poll. “The voting should be for Taiwan citizens only. The other voices do not represent us,” said the student leader who identified herself only as Xiao-Peng. “Some gay friends share with us their frustration and grievances. They feel that they are not accepted by society and it is hard to come out of the closet. They said they only want a sense of belonging and not to be discriminated against,” she told ucanews.com.