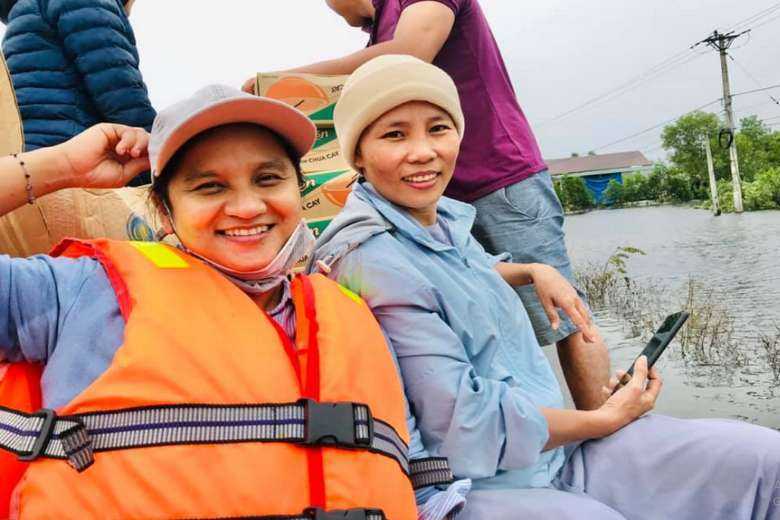 Simon Duong Ngoc Hai pays regular visits to his close Buddhist friends, plays chess with them, discusses social and religious issues and learns practical skills such as growing bonsai, yellow apricot flowers and orchids from them.

Hai also invites them to attend Christmas parties at his home and enjoys their frequent visits. Many of them are his old fellow inmates.

“We attempt to build up harmonious relationships with one another and heal previous sharp divisions between Catholics and Buddhists,” he said.

In 1963, Buddhists in Hue, started to stage protests against the South Vietnam government led by the late Catholic President Ngo Dinh Diem, who was assassinated at the end of that year.  At first, they struggled for Buddhist activities and later for political goals.

They supported communist forces and fought against the US-backed southern government led by the late Catholic President Nguyen Van Thieu until communist forces seized control of Saigon, the south’s capital, in April 1975.

As a result, the conflict aroused deep hostility between Catholics and Buddhists who kept a wary eye on and discriminated against one another for a long time, Hai said.

The 81-year-old, who has five children and 14 grandchildren, said many Catholics and Buddhists, including monks, were sent to jail and re-education camps by the communist government after the country was reunified in 1975.

They had no choice but to share food, tend to one another and live in harmony in the hope that they could survive and return home.

Hai, who spent 18 months in a labor camp for having worked as a village official for the former South Vietnamese government, said he and old fellow inmates often hark back to their years in prison to sympathize with one another.

He said he is appreciative of the Buddhist inmates who saved him two times while at the camp. He got lost in a forest while collecting bamboo shoots and spent a night alone there. He could not find his way back to the camp until Buddhist inmates found him.

They also looked after him while he was suffering from malaria.

“Many followers of the two religions became close friends after they experienced hard times in the aftermath of the war,” he said, adding that they had put the past behind them, respect their differences and live in peace.

An elderly priest, who used to serve as a chaplain, said countless religious facilities were confiscated and religious activities were restricted by the government.

The septuagenarian priest said many Catholics and Buddhists struggled together for religious freedom and rebuilt good relationships with one another by paying goodwill visits to one another during Christmas, Vesak and the Tet Lunar New Year.

He said since the government started revisionist policies and opened the door to the international community in the late 1980s, foreign NGOs have carried out development projects and followers of the two faiths are given opportunities to work together for the common good.

Sister Consolata Bui Thi Bong of the Daughters of Mary of the Immaculate Conception said Catholic and Buddhist nuns in 2001, for the first time, worked together to prevent the spread of HIV/AIDS among local communities and care for sufferers in Thua Thien Hue province through Nordic Assistance to Vietnam, a project funded by Norwegian Church Aid.

Sister Bong, head of the Catholic HIV Coordinating Committee, said although the project ended years ago, nuns from the two religions still continue their humanitarian services by caring for HIV/AIDS patients, working with victims of natural disasters, taking care of Covid-19 patients and training people in making herbal medicine.

Thich Nu Bich Chan, a nun from the Buddhist HIV Coordinating Committee, said they work with 200 patients and 112 orphans whose parents died of the disease.

She said Catholic and Buddhist volunteers also hold funerals and pray for the dead according to their creed.

“Active cooperation in giving material and spiritual support to people in need is an effective way to bring followers of different faiths closer together,” Sister Bong, a former superior of the congregation, said.

She said they worked harmoniously together and lent patients who were sunk in gloom and depression emotional support and great comfort and consequently many patients recovered and left the health facilities.

Lovers of the Holy Cross Sister Clare Tran Hoang Linh, from a community in Quang Tri province, said they worked with Buddhist nuns to dispense emergency aid to villagers whose crops were washed away during unseasonal floods in April. They offered 10 tonnes of rice and instant noodles to 800 households in Hai Lang and Trieu Phong districts.

“People, most of them Buddhists, were pleasantly surprised to see Catholic and Buddhist nuns together on boats, a moving image they caught after a gap of two years due to the Covid-19 pandemic,” she said.

“We visit pagodas and have parties during the Vesak festival while Buddhist nuns also visit and offer us flowers at Christmas. We live in peace, treat one another as close friends and work for people’s happiness.”