Traditional fishing boats are parked in the Catholic-dominated Vadi coast of Kollam during the Covid-19 lockdown in September 2020. (Photo: Christopher Joseph)

Catholic leaders are among those opposing a multimillion-dollar overseas deep-sea fishing project in Kerala that they say threatens the livelihood of ordinary fisher people in the southern Indian coastal state.

Following criticism from opposition leaders and rights groups, the communist-led state government withdrew two memoranda of understanding it signed with a US-based firm that allegedly violated the state’s fishing policy and the rights of poor fisher people.

The government on Feb. 24 withdrew from the MoU signed with EMCC International India Pvt Limited, a US-based firm, for a US$680 million project that purportedly aims to revamp and modernize the state’s fishing industry.

The government also canceled another MoU with the same firm for manufacturing 400 deep-sea fishing vessels and developing the state’s fishing harbors at a cost of some $400 million.

“But still we are not sure if it has scrapped the entire project. We want an assurance from the government that it will not move ahead with the project,” said Father Jacob G. Palackappilly, deputy secretary-general of the Kerala Catholic Bishops' Council.

Many suspect the government quickly pulled out of the MoU a week after criticism began to surface in the media in the state, where elections are due in April-May.

Christian leaders like Father Palackappilly say the project would push Kerala's fishermen further into poverty as the multinational operation would take away the lion’s share of an already dwindling catch.

Further, deep-sea fishing would eventually reduce fish wealth in the littoral zone on which thousands of Kerala fishermen on country craft depend for their daily sustenance.

“The government claims the projects will ensure the welfare of all, but our past experience shows that such government promises are seldom translated into reality,” Father Palakappilly told UCA News on Feb. 25.

The state of 33 million people has some 200,000 fishermen active on the Arabian Sea, at least half of them Catholics, mostly in the coastal districts of Trivandrum, Kollam, Alappuzha and Kozhikode. 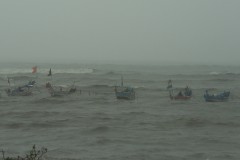 “Our fishermen are so traditional that they are unable to cope with challenges from the multinational companies (MNCs) entering into the field with highly mechanized boats and trawlers,” said Father Kudiamssery, public relations officer of Alappuzha Diocese.

“If MNCs venture into their traditional work, the poor will be left jobless,” Father Kudiamssery, who was supporting the fishermen’s protest against the project, told UCA News on Feb. 25.

“Climate change has substantially reduced their catch within the permissible distance. Now, many of them step into deep-sea fishing as well,” said the priest.

“The Catholic bishops want the government to clarify whether it has scrapped the project entirely or only canceled the MoU.”

Work on the project began in 2018. “So much work has been done in two years. Therefore, church leaders and fishermen suspect the government will continue with the project after the election,” Father Tharayil said.

Kerala's communist-led government is hoping to be re-elected to power in the 140-member state assembly before the five-year term of this government ends on June 1.