Catholics are not the only ones seeking miracles from St Anthony 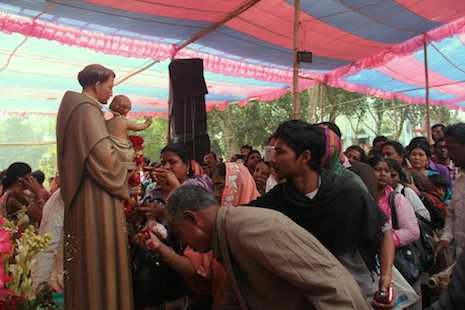 Pilgrims gather to touch the statue of St Anthony

Pushpa Costa had to wait for an hour before she could touch and kiss the statue of the “Miracle Saint,” St Anthony of Padua, on his annual feast day on Friday.

For a quarter century she has made the pilgrimage to this shrine, located in the village of Panjora in Gazipur district north of the capital – the most popular of the country’s Catholic shrines – to offer thanks for the miracles she says she has been granted.

“Many years ago, my husband was seriously ill from a peptic ulcer and unable to eat. Doctors feared he would die if the condition continued much longer. I cried to St Anthony for his recovery and promised that I would come every year with my family to thank him,” said Costa, 61, the mother of three.

Her husband survived and now works abroad. One of her daughters has become a nun.

“It’s by the grace of St Anthony that my family has lived in happiness and peace all these years," she said. "St Anthony can fulfill any wish if one prays to him with deep faith.”

But Catholics are not the only ones who put their faith and hope in the Portuguese saint.

Rita Rani Banik, 50, a Hindu, says she also has good reasons to thank the popular saint. She traveled about 100 kilometers to attend this year’s feast day.

“Four years ago my husband paid about 250,000 taka [US$ 3,125] to local agents to get a job in Dubai, but he was deported within two weeks of arriving because his passport and other documents were forged,” she said.

Unable to trace the local agents to get a refund, she came to know about St Anthony’s reputation as a finder of “lost goods and valuables.”

“I promised a manot [a gift for granting a favor] to St Anthony and it worked. We were able to get most of the money back and it was crucial for our five-member family," she said, adding that it was just the beginning of St Anthony’s blessings.

“Three years ago, my eldest daughter became seriously ill with a high fever, just before her HSC exams [final high school exams]. I prayed to St Anthony for her. She is happily married now and has recently given birth to a boy,” Banik said, adding that saints such as Anthony are for the benefit of all people.

Like Costa and Banik, many of the thousands attending the feast consider the saint no less than a demigod who can fulfill any prayer.

In Muslim-majority Bangladesh, where Christians account for less than a half percent of the estimated 150 million population, devotion to Mother Mary and St Anthony is widespread.

Although St Anthony’s actual feast day is commemorated on June 13, the event is held in February when the weather is more comfortable for pilgrims.

Attracting about 50,000 people annually, the St Anthony pilgrimage is the largest Christian gathering in the country. The other half dozen shrines in the country, including those devoted to the Sacred Heart of Jesus and Mother Mary, attract only about 10,000 people.

Legend has it that the son of a Hindu saminder, or landlord, was kidnapped by Arakanese pirates but later freed by a Portuguese missionary priest. The former captive converted to Christianity and took the name Dom Antonio.

Since that time he has often been confused with St Anthony.

Dom Antonio began to preach in the Bhawal and Atharogram areas north of Dhaka and is credited with the conversion of thousands of lower caste Hindus and establishing these areas as the oldest and largest Catholic settlements in the country.

Father Theotonius Proshanto Rebeiro, parish priest of St Nicholas of Tolentino Church in Nagari says the story of Dom Antonio, as much as the historical reverence for St Anthony, has spurred tens of thousands of people to visit the region each year for the feast day celebration.

“He pioneered evangelization and popular devotion to St Anthony among the people.” 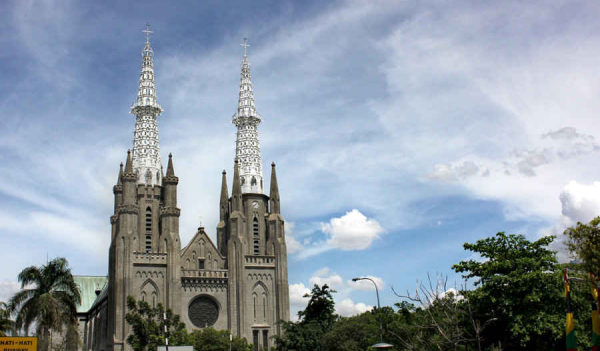