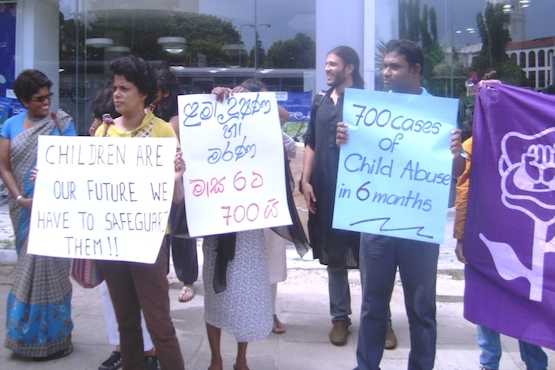 Activists rally in Colombo, Sri Lanka, in favor of implementing new laws to protect victims of rape and child abuse while advocating women's freedom to choose whether to abort when their lives are in danger. (ucanews.com photo)

Some Catholic laywomen and doctors in Sri Lanka are demanding changes to the country's legal framework as they push to decriminalise abortion in the face of heavy opposition from local bishops.

The Feminist Catholic Network (FCN) recently signed a petition in support of proposed legal amendments that want to expand on current provisions in cases of rape, incest and serious fetal impairment.

The FCN insisted the church should support the push to modernize the law by allowing the medical termination of pregnancies in extenuating circumstances. These include rape, incest and pregnancies involving girls under 16, especially when the fetus is at risk of being seriously impaired and the woman's life is at risk.

Parliament is now scrutinizing cabinet-approved papers that call to legalize abortion when pregnancy results from a case of rape and the fetus is diagnosed as being congenitally malformed in a way that will certainly lead to death.

Sri Lankan bishops have responded by condemning the government for considering legalizing abortion under any circumstances.

"We are against any form of abortion because, according to Catholic teaching, life is sacred from the moment of conception," said Bishop Emmanuel Fernando of Mannar Diocese in Northwest Sri Lanka.

"We believe that from the moment of conception there is a human life," the bishop told ucanews.com.

"In the case of a rape that results in unwanted pregnancy, we would like to help with trauma counseling," he said.

"The Catholic Church runs a home for unwed mothers and usually there are counselors to help them face this [difficult] situation."

Christian groups have been campaigning to keep abortion outlawed for decades.

Over 100 activists who signed the petition on March 5 said the official position put forward by a few clergymen from the Catholic hierarchy does not represent the majority opinion of ordinary Catholics in the country.

"We strongly object to the campaign they have led against this bill and find its position antithetical to the call for radical justice and mercy that is found in the [four] Gospels," they said in a statement. Sri Lankan police records from 2015 show that 80 percent of rape victims that year were girls under 16. (Photo by Lakruwan Wanniarachchi/AFP)

Some doctors have also voiced their concerns.

"As doctors we are caught up in an extremely difficult situation. We scan every mother not once but several times," said Dr. Lakshmen Senanayake, who is not a Catholic.

"If there is a problem [with the fetus], we can identify it. Once this is identified, we as doctors have an obligation to tell this to the mothers," added Senanayake.

The obstetrician-gynaecologist served as the national coordinator of the International Planned Parenthood Federation (IPPF) Initiative on Reducing Unsafe Abortions in Sri Lanka from 2005-2011.

"Our concern is the individual agony these parents are going through. When the helpless parents are asked what should be done, our hands are tied," she said.

Ermiza Tegal, a lawyer and female rights activist who handles family law and domestic violence, described Sri Lanka's abortion law, which dates back to 1883, as anachronistic.

She said Penal Code No. 2 of the original 1883 law and the Code of Criminal Procedure Act No. 15 from a newer law passed in 1979 are both badly out of date and should be amended to allow medical terminations of certain pregnancies.

Other locals thought leaders echoed similar views at a conference on the theological aspects of abortion held in the capital Colombo in the first week of March.

"We find that the most powerful backing for the autonomy of women comes from the many women detailed throughout Scripture, not least Mother Mary," she added.

The FCN drew attention to a 1990 study which estimated that the country sees 125,000 to 175,000 induced abortions each year, most of which are performed illegally.

A subsequent study put the figure much higher at 658 induced abortions per day, giving an abortion ratio of 741 for every 1,000 live births.

However another study undertaken in 2007 calculated that around eight abortions took place for every 100 women that year.

Women's rights activists argue the law is unfair as it forces young women to seek out illegal abortion clinics that can put them at risk of serious injury and even death.

The mortality rate for those who underwent abortions in Sri Lanka in 2013 is 10 percent, statistics show, meaning that one in 10 women lost their lives attempting to terminate their pregnancy. That would make illegal abortions the third most common cause of death among pregnant women.