Latest casualty of domestic violence sparks calls for change; half of Christian women allegedly assaulted by spouses at home 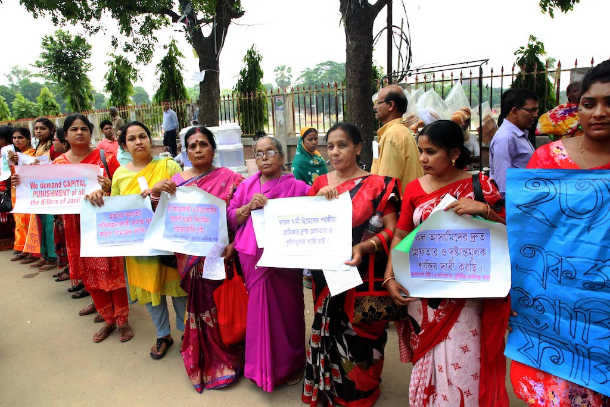 Women hold placards demanding justice in relation to the alleged murder of Catholic housewife Jennifer Monica Gomes, 24, by her husband and her in-laws, during a rally at Gazipur city in central Bangladesh on April 15. (Photo by Himel Rozario)

On March 28, a group of villagers in central Bangladesh's Gazipur District were shocked to learn that a young housewife had killed herself.

The body of Jennifer Monica Gomes, 24, the Catholic mother of an 8-month-old daughter, was found hanging from a ceiling fan in her room.

Suspicions were aroused as the tragedy occurred just 18 months after she had married Himel Gomes, a local Catholic man. The woman's parents, Anthony and Lolita Gomes, blamed their daughter's spouse and in-laws for her death.

On March 29, Anthony Gomes filed a murder suit against all three. He claims Jennifer was a victim of domestic violence that began after she found out her husband was having an affair, and escalated to the point of a murder plot being hatched.

"My daughter was facing abuse at the hands of her husband and in-laws because she protested and sought to separate from Himel, as he was having an affair with his aunt," Anthony told ucanews.com.

"They murdered her to stop word of the affair getting out, and then they hanged her body to make it look like suicide," he said.

"I demand justice!" he cried, adding he would only be satisfied at seeing all of the alleged co-conspirators get the death penalty.

Based on his allegations, police arrested the mother-in-law, but the other two fled and are still in hiding.

Meanwhile, an autopsy was performed on Jennifer's body before she was buried but the report had not been made public as of April 16.

"The probe is ongoing, and we can only confirm if it was a murder or suicide after all the chemical and forensic test results come back. Then the law will take its course," said investigating officer Amirul Islam.

Jennifer's death has sparked a firestorm among the country's Christians.

Many have taken to Facebook and other social media to publicize her case, and highlight how domestic violence is spiraling out of control while many abusers go unpunished.

They issued the authorities with a one-month deadline, threatening more demonstrations unless her alleged killers are caught and duly punished.

"The murder of a young woman like Jennifer, who was so full of life, is unacceptable," BCA president Nirmol Rozario told ucanews.com.

"There seem to be strong indications that it was premeditated murder. We demand justice and that those responsible be punished, in the hope that we won't see more of these tragic cases in the future," he said.

Domestic abuse is an increasingly common phenomenon in Bangladesh.

About 87 percent of married women face some form of domestic violence during their lifetime, according to a national survey by the state-run Bangladesh Bureau of Statistics (BBS) in 2014.

Only half of the victims were treated for their injuries. About a third of the victims said they chose not to seek treatment due to fears of a backlash from their husbands, the survey said.

Rights activists say women in Bangladesh are subjugated by a patriarchal society that hews to conservative religious mores and ideals, and that those who dare to challenge men's authority do so at their own peril.

The survey was preceded by another study on domestic violence in 2013 that was sponsored by the World Health Organization (WHO). It covered 10 countries including Bangladesh.

The earlier study found that 66 percent of women never talk about their experience of being victims of violence in their own homes. Only a small fraction seek help from the police, hospitals or other authorities.

It also surveyed 2,400 Bangladeshi men. More than four in five believed a husband has the right to hit his wife "mildly" in order to "correct her" behavior. In rural areas, 89 percent of the men surveyed concurred.

Amid pressure from women's rights groups, the government passed the Domestic Violence Act in 2010, which offers a maximum punishment of two years in jail for those who commit domestic violence.

Activists say the law is poorly enforced and fails to tackle the root causes of the problem, namely, the country's patriarchal mindset that has created an unequal society and led to the retention of questionable traditions like child marriages.

"We believe at least half of all Christian women in Bangladesh suffer from domestic violence," Rita Roselin Costa, convener of the Women's Desk for the Catholic Bishops' Conference of Bangladesh, told ucanews.com.

"A culture of impunity and silence dominates, which restricts women from speaking out or seeking help," she said.

"Our society teaches women to endure pain and suffering for the good of their family, so they keep quiet. They are made to believe that reporting domestic violence would tarnish the family's image."

Christians account for less half a percent of the population of 160 million but church officials and rights advocates say the same social malaise has infected their communities.

"Our religion teaches us about equal rights and respect for men and women, but many Christians (here) have not come out of that patriarchal mindset."

He cited one case he was handling involving a Christian husband and his Muslim wife.

"The husband has been abusing his wife regularly. Recently, she was beaten so badly she got a nosebleed, so she came to me for help," the priest said.

"To tackle this scourge, the Church has devised a 10-year-plan for post-marriage formation," he noted.

"Up to now we've focused on getting Christians prepared for marriage, and making sure they are sincere about it. But it's time we follow through on that by helping them after they tie the knot."