Catholic woman arrested for subverting the state in Vietnam 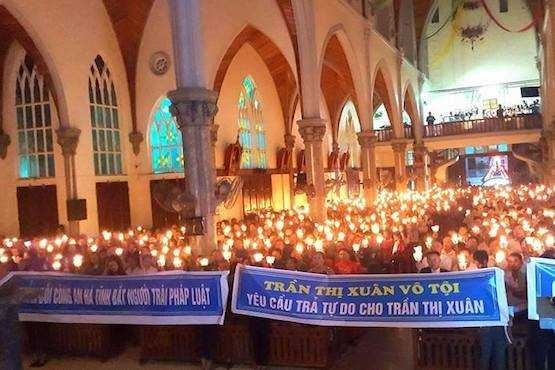 Catholics in a central Vietnamese province have expressed support for a female activist who was arrested for "attempting to overthrow the government."

Teresa Tran Thi Xuan, a member of Cua Soc Parish, was arrested while traveling to work in her home province of Ha Tinh on Oct. 17.

The Ha Tinh Provincial Public Security Department accused Xuan of "acting to overthrow the people's government under Article 79 of the Penal Code."

The department said Xuan is a member of the Brotherhood for Democracy, a domestic civil society which the government sees as reactionary group acting to overthrow the communist state.

The 41-year-old was accused of causing public disorder, infringing upon national security, resisting the Communist Party, calling for protests and conducting voluntary activities among young people.

Others voiced their concerns to ucanews.com.

She said Xuan has done nothing wrong except for helping the poor. "Can an honest and direct woman attempt to overthrow the ruling system?" she asked.

Some local Catholics said Xuan actively did charitable work in the parish. She and young people in the parish collected used items to sell so to support people in need. They also spoke out against Taiwanese firm Formosa which was responsible for a massive toxic waste spill in the province.

"We demand the government release her," another Catholic said.