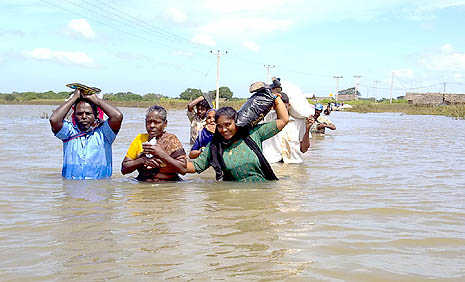 The Catholic Church has joined with local state officials to take basic needs, medicines and fuel to thousands of people in flood devastated Arippu parish whichremains cut off from the mainland of Mannar diocese in northern Sri Lanka. During heavy rain and wind, Caritas Valvuthayam Mannar and the local priests took the provisions by sea. The only bridge that connected the Arippu parish with Mannar district was washed away. Even the sole suspension bridge is in dilapidated condition. Worst floods in December and January caused untold destruction in the area. “Will fishermen and farmers resettled in their villages after end civil war get their supply line?” asked Father Francis Assisi Jude, the parish priest of St Mary’s church in Arippu, who also asked if the government would now heed the church calls to reconstruct a temporary bridge to begin the public transport to this Catholic village, as good weather retuned. Arippu in the north western coast is surrounded by wild jungle, sea and Aruviyaru Sub River. Transport and, usual mobile health services are suspended. Five days ago, at around 9pm, a parish priest and four villagers crossed the river in chest deep water carrying an unconscious 18 -years -old girl and reached the main road with a two hour journey to a hospital. “What we need is a bridge urgently,” said Father Jude. "People fear that in case of heavy rain they have to communicate with Caritas or navy for boats." SR13549.1644