St. Paul Catholic University of Indonesia in Ruteng has been forced to close to contain Covid-19, its president says. (Photo: unikastpaulus.ac.id)

The first Catholic university to open on the Catholic majority Indonesian island of Flores has been forced to shut itself down after one of its students was found last week to be infected with Covid-19.

St. Paul Catholic University of Indonesia, which opened in May 2019 and is managed by Ruteng Diocese in East Nusa Tenggara province, instructed all lecturers, staff and students to work or study from home starting Sept. 19, university president Father Yohanes Servatius Lon said.

The closure will remain in force until further notice, he said.

"This is to facilitate the tracking and examination process regarding contact history of the student who tested positive for Covid-19," the president said in a letter sent to students and staff.

Manggarai district, where the campus is located, has recorded 27 cases, of which one has died and 22 are still being treated.

Hendrikus Mandela, chairman of the Ruteng branch of the Indonesian Catholic Students Association, praised the university’s quick response to news of the infection.

"It’s very important to contain the spread of the virus at the university,” he said.

He stressed the need for people not to gather in large crowds and voiced concern over campaign rallies due to be staged ahead of local elections in December. "It would be better if campaigning was done through social media,” he said.

Village heads say they have tightened up measures to screen people coming to and going from their villages.

"We are rigidly enforcing controls to ensure that all newcomers comply with health protocols," said Yulis Lesing, head of Compang Wesang, a village in East Manggarai district. 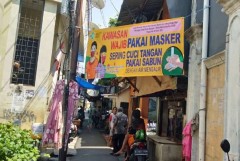 Over the past few weeks, Indonesia has regularly recorded more than 3,000 new Covid-19 cases per day.