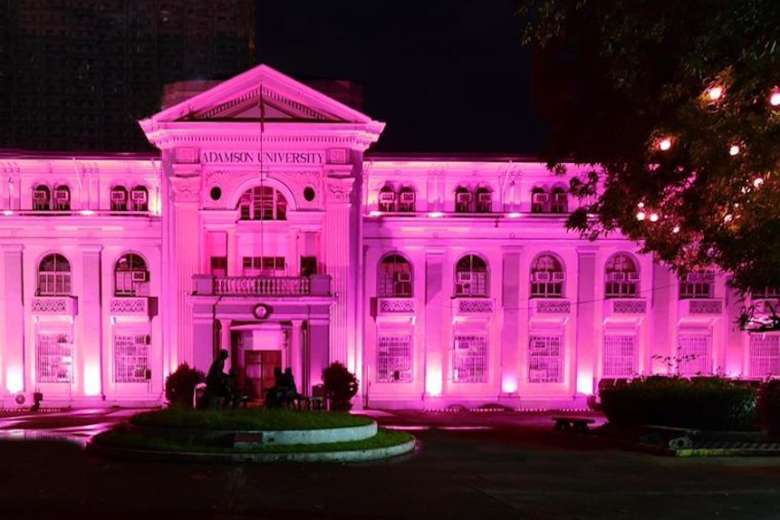 Three of the Philippines’ biggest Catholic universities have endorsed Vice President Leonor “Leni” Robredo after she announced she would run for the presidency in next year’s polls.

Jesuit-run Ateneo de Manila University, De La Salle University and the Dominicans’ University of Santo Tomas lit up their school buildings in pink as a show of support for the vice president.

Robredo is a staunch critic of President Rodrigo Duterte and has spoken out frequently against several of his policies, especially his deadly war on drugs.

Many of the students said they were Robredo supporters and had been waiting and hoping she would run for president.

They said they were fed up with the way the present administration was handling the pandemic and the country in general and so were very happy their respective universities were supporting Robredo.

They also said lighting up their buildings in pink was a good gesture as many Robredo supporters say pink symbolizes hope.

Finally, we have a candidate to challenge Duterte’s cronies. I hope this support will translate into votes for the vice president

“We are very happy to see our alma mater and school beaming with pink. This means we are on the right path. Our school taught us values and good leadership. I think it is time they too show where they stand,” University of Santo Tomas graduate James Carlo Tizon told UCA News.

“Finally, we have a candidate to challenge Duterte’s cronies. I hope this support will translate into votes for the vice president. Let us register and vote for her if we want change and we believe in the principles she is fighting for.”

Right after her declaration, Robredo’s supporters flooded social media with pictures in pink frames or messages written in the color. Others put up pink ribbons outside their homes.

“Pink is the new symbol of protest and activism. It is also a symbol of hope, a new beginning, especially now that another woman will run for the presidency. I pray she will bring healing to our land,” Rodredo supporter and Manila parishioner Camille Degracia told UCA News. “This is like the time of Cory Aquino. When people who opposed the Marcos family tied yellow ribbons in and outside their houses. It’s the same feeling,” Quezon City resident Gil Valdez said.

Robredo’s path to the presidency does not look easy, according to observers.

However, she has doubled her support in Manila and the central Visayas region since July, according to the survey.

Supporters may be heartened by the fact that Robredo, an almost political unknown in 2016, came from nowhere to claim the vice presidency that year.

GINA GERONIMO
I am a supporter of VP Leni but I think you have to verify if the photos that you saw (dlsu, ateneo, etc) were all taken last week. I pass by DLSU almost every week and it's not the same thing that you see in the photo that is circulating as there is a crane like structure that is there now. We don't want others to think that we are spreading fake news.
Reply

JOSE T.
Same with UST; the campus in question was an old photo. Please take this down, otherwise the Dutertards will think we're the ones falling for fake news.

PAUL NUMAN
Although many students support VP Leni Robredo, the pictures used in this article are maliciously appropriated. The picture of DLSU was taken during October 2019, to support the Breast Cancer Awareness month. The picture of UST was taken during the advent-Christmas seasons 2020, hence the pinkish purple color. Also and perhaps more importantly, the administrations of De La Salle University and the University of Santo Tomas have not issued any official institutional support to VP Robredo. The headline "Catholic Universities rally behind VP Robredo" is wrong.
Reply