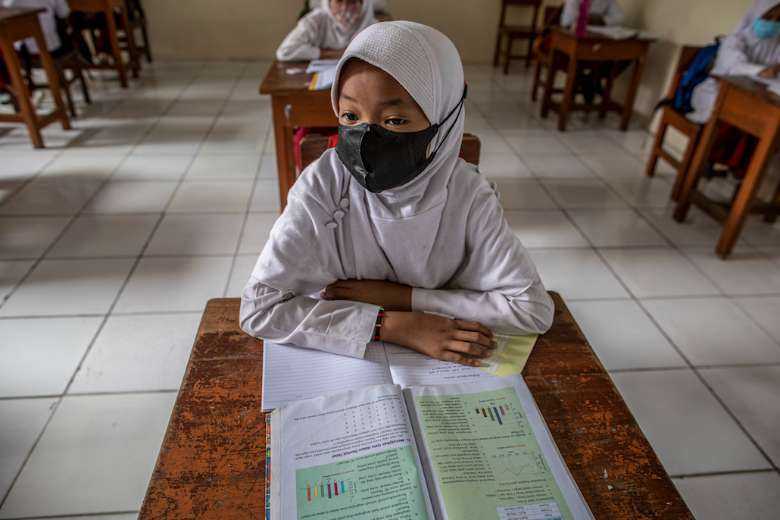 Students at an elementary school in Indonesian capital Jakarta. Government funding of public elementary and secondary schools has been badly managed. (Photo: AFP)

The stabbing to death of a Catholic teacher in Indonesia’s East Nusa Tenggara province has shocked the public, particularly in the Christian-majority region.

Adelfina Azi, the 59-year-old principal of a public elementary school in Nagekeo district, was stabbed in her abdomen on June 8 by the father of a student who was angered by the school barring his son from taking exams. The fourth-grader was expelled from the school due to overdue fees of about US$120. Azi was rushed to a state hospital but died the next day from her severe wounds.

The incident — the first of its kind in the country — has rocked Indonesia’s education sector. Unequivocally, it highlights frustrations with the education system, especially in a region where education quality is below the national standard. The presence of Catholic schools has not improved the situation.

While condolences and words of support flooded in in for the principal and her family, condemnation was aimed at her attacker, who is facing years in jail, sparking concerns over the future of his son.

At first glance, the public saw the man — a farmer — as a criminal, while the teacher was a heroine. But digging deeper, who is the victim here, the principal or the farmer?

While disavowing the man taking the law into his own hands, both are the victims of corrupt practices in the education system, particularly at elementary level where everything is paid by the state.

Alleged embezzlement of the BOS, perhaps due to technical failure, has forced many schools to find alternatives to support school operations

Indonesian public elementary and secondary schools are prohibited from charging students, in whatever form, because the government subsidizes each student every year through the School Operational Assistance Fund (BOS).

Every year the government disburses BOS funds to elementary and secondary levels, both private and public. This year the Education Ministry has allocated 52 trillion rupiahs ($3.6 billion) to more than 216,000 institutions. The allocation for each student ranges from $130 to $230.

Unfortunately, in many regions — even Jakarta — the “humanitarian fund” has been badly managed, with many schools and education officials facing legal charges for misappropriating the fund.

Alleged embezzlement of the BOS, perhaps due to technical failure, has forced many schools to find alternatives to support school operations, such as a mandatory committee fee, even though it is illegal.

Adelfina Azi was attacked by a student’s father, Didakus Dame, who due to poverty failed to pay such a fee. Thousands of other parents face identical circumstances, relying on schools’ kindness and government intervention.

The quality of education in East Nusa Tenggara province, whose population of 5.3 million is nearly 90 percent Christians, remains at the bottom of national rankings, mainly due to incompetent teachers, poor facilities, poverty and malnutrition that affect students’ motivation to study.

So, the violence against the school principal is more complex than it looks, and it would never happen in state-run schools if the regulations were followed and the funds were disbursed and used properly.

Indonesia’s basic education has been safeguarded through the 2003 National Education System Law and other ministerial regulations. The law prohibits schools or educators from charging elementary and junior high school students for any reason.

However, many schools have ignored the law and continued to charge students in the form of committee levies determined by a school committee that consists of a school principal, parents and local community leaders. It was allowed by the government to monitor assistance funds and find alternative funding, but not allowed to levy students.

Five years since the decree was rolled out, many schools continue to levy students on the pretext of insufficient subsidized funds.

This must stop or the country’s education will be compromised, sacrificing students as the primary beneficiary of education.

Good governance in terms of financial transparency has been lacking in many schools nationwide.

The government must intervene in how schools operate, particularly over the use of state funds. It has to evaluate the management of government funds to prevent them from going astray.

Good governance in terms of financial transparency has been lacking in many schools nationwide.

Since the government has increased BOS funding this year, it must examine how the subsidy was disbursed and used.

Irregularities in its disbursement and its outside school needs are not only a crime but also entail devilish structural problems. In the case of the death of a school principal, an investigation must be launched to see whether the BOS fund was received by that particular school.

The government’s strict supervision of education and schools, particularly in remote areas, must be ensured to minimize discriminatory decisions against students and teachers.

Never again should illegal practices cost the life of an educator in a Catholic-majority province where human dignity and life are utmost values.