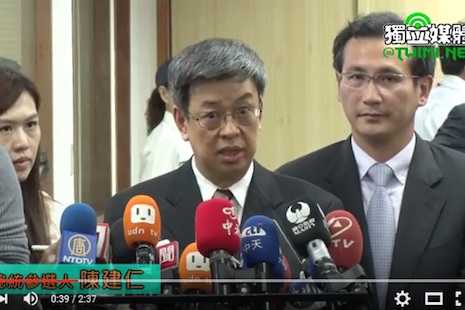 Philip Chen Chien-jen, a Catholic vice presidential candidate in Taiwan, speaks to the press on Nov. 18. (Image from TWIMI.net)

The Catholic candidate hoping to become Taiwan’s new vice president spoke of his respect for gay rights, but noted that the sensitive issue of same-sex marriage needs further discussion.

Mainstream media in Taiwan have focused attention on Philip Chen Chien-jen, a Catholic former public health official and academic, after he was on Nov. 16 announced as the vice presidential candidate to run alongside Tsai Ing-wen. Tsai is seen as a favorite to win the presidency in the upcoming January elections.

Chen’s Catholic identity, particularly his knighthood in the church, has been of particular interest to the media and to Catholics in general.

Before a Nov. 18 meeting with the political organization backing him, the Democratic Progressive Party, Chen was asked for his stance on same-sex marriage.

"God loves everyone and so he also loves gay people," said Chen, who was conferred a knight of the Order of the Holy Sepulchre in 2010 and of the Order of St. Gregory the Great in 2013 for his contributions to the church.

Chen cited a 2013 statement from Pope Francis, in which the pope said: "If someone is gay and he searches for the Lord and has good will, who am I to judge?"

"Therefore, I also believe that gays have the right to pursue happiness and we should respect that right," Chen said.

"But since same-sex marriage involves a change in society’s system, it needs more in-depth discussion before a decision is made."

In Taiwan, there is public support for the legalization of same-sex marriage — promoted in the name of a "pluralistic form of family," which Tsai has publicly supported.

Taiwanese legislators have been drafting related bills in the wake of a U.S. Supreme Court decision that legalized same-sex marriage in every state.

However, some observers believe this may prove to be a delicate situation for Chen, if he is elected to office.

"This is an inevitable sensitive topic that Chen has to face eventually. He must have thought of it before he decided to be Tsai’s running mate," said Cathy Huang, a member of a Taiwanese Catholic society for university students.

"I think he would face pressure from the bishops’ conference," she added.

David Chiu, a layman in his 30s, told ucanews.com that some Catholics have taken to social media to discuss Chen’s participation in the election, particularly since the Catholic candidate made a note of saying that he consulted with Archbishop John Hung Shan-chuan of Taipei before reaching his decision to run.

"One asked why Chen needs to discuss with the archbishop while another thought Chen must have known his political stance would contradict the church teaching, and thus asked for a church pardon beforehand," Chiu said.

In August, the government conducted a 90-day online poll on gay marriage. The poll, which ended on Oct. 31, showed results heavily in favor of same-sex marriage with 71 percent of participating voters supporting it. However, some voters claimed that loopholes in the online poll painted an inaccurate picture.