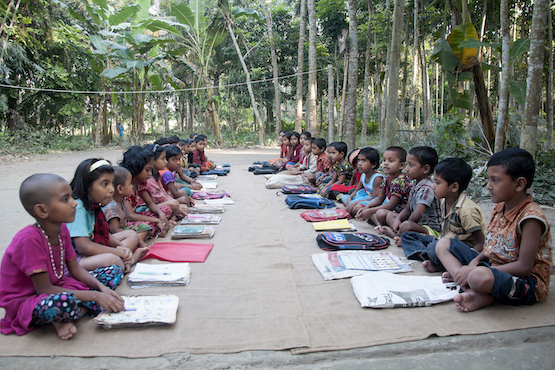 Children gather in front of a church-run primary school in Natore district, northern Bangladesh in this 2013 file photo. (ucanews photo by Stephan Uttom)

Education Minister Nurul Islam Nahid announced the extension of primary level education from grades five to eight, on May 18.

Schools must implement the change by 2018 or face government sanctions, Nahid said.

The decision falls in line with the country's National Education Policy 2010, which recommended the changes to reduce the dropout rates of school children and to also ensure that students gained a certain level of skills.

Primary education is free in Bangladesh's government schools but many impoverished students drop out from grades six onward because fees are charged.

The decision will affect 108,500 primary education institutions including 63,000 government-run schools.

The Catholic Church in Bangladesh runs a university, eight colleges, 516 primary schools and 64 high schools, where some 100,000 students get an education.

Catholic educators see the government's move as an effective way to reduce dropout rates, but they have expressed concerns over a lack of resources to implement it. The decision might have negative impact on a school run by the Congregation of Our Lady of the Missions in southeastern Chittagong diocese, said the school's headmistress.

"Extending primary education up to grade eight would surely reduce drop outs, but we don't have the financial ability to do so," said Sister Jyotsna Corraya who runs Don Bosco Primary School, which educates 200 underprivileged children.

"If the government puts pressure on us, we would need to shut it down," she said.

The school is free for its extremely poor students who can't pay tuition fees. The majority of them drop out to enter vocational trades after completing grade five.

"To offer a good education up to grade eight, you need good teachers but it's very difficult in rural areas as educated people are city-bound," said Monoronjan Sarker, from St. Mary's Primary School Mangaccha village in northern Natore district, covered by the Rajshahi Diocese.

"The decision might be good for city schools but not for us," Sarker said.

Even if there were good teachers available, his school can't keep them for lack of funding, he said.

"People are not wealthy, so we can't charge more tuition from students," Sarker added.

The required infrastructure and management needed for the extension also pose challenges for church-run schools, said Pius Nanuar, regional education manager at Caritas in the predominant tribal Sylhet Diocese in the northeast.

"There are 30 missionary primary schools [in the diocese] and people largely rely on them for a quality education," said Nanuar.

"To follow the government rule, schools will need massive infrastructure development which is a big challenge for the church," he said.

In addition, the schools will need strong management committees, which pose another challenge.

"It's difficult to find qualified people for such committees, and it would be really hard to keep them free from the influence of local politicians," Nanuar said.

In the face of challenges it would be tough for many church-run schools to follow the directive in time, said Holy Cross Brother Harold Bijoy Rodrigues, secretary of the Catholic Bishops' Education Board.

"We don't think it's possible to upgrade schools by 2018 because we need huge funds for infrastructural and administrative development," Brother Rodrigues said.

"We can go for the upgrade where the schools have the ability. We are considering downgrading the schools to grade four where it's not possible," he said.